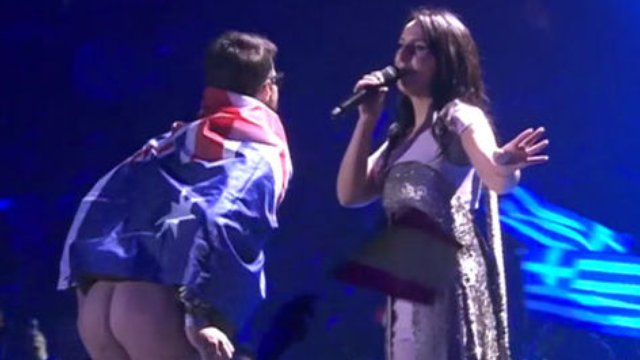 Remember that guy who tried to pick up Gigi and kiss Kim K's butt? Well he's back at it again with the 'pranks', this time during the Eurovision Song Contest...

This weekend (May 13th) saw the annual glitter and noise fest known as the Eurovision Song Contest take place in Ukraine, an always enjoyable TV extravaganza watched by millions worldwide and celebrating all the most ridiculous outfits and catchy dance melodies the continent has to offer.

But one man chose to sully the good name of Eurovision by crashing the stage during a performance by last year's winner Jamala, getting his bum out and wiggling it around while adorned with an Australian flag.

The horror! Won't somebody please think of the children?!?!

Needless to say, Twitter went into an immediate, and hilarious, meltdown.

But not everyone saw the funny side and the owner of the offending buttocks, 'prankster' Vitalii Sediuk, now faces five years in jail or a fine for aggravated battery, according to Ukraine's Minister of Internal Affairs, Arsen Avakov.

Although, tbf, Sediuk is a repeat offender with various other stupid and/or irritating pranks to his name including...

Attempting to pick up Gigi Hadid.

And, perhaps most famously, attempting to kiss Kim Kardashian's butt.

What is this guy's obsession with people's rear ends?

So basically, while the Eurovision stunt was quite funny, this guy has a reputation of being kind of a professional a**hole so maybe he shouldn't be too surprised if this latest "prank" lands him in the slammer. Hey, at least he's getting all that attention he so clearly craves (bless).

In short, maybe next time, he should be a bit less cheeky.