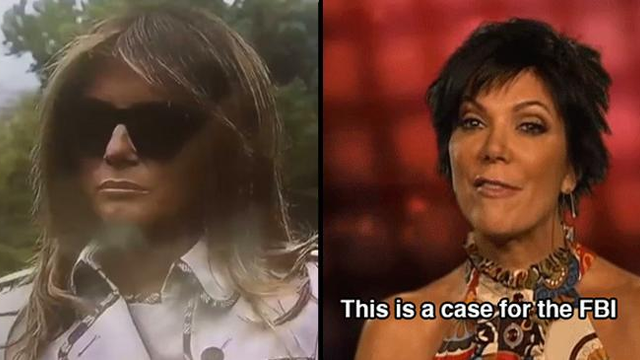 In case you missed it, the internet is hilariously claiming that Donald Trump hired a body double to pose as his wife Melania during a tour of a Secret Service training facility and now she's been turned into a savage meme.

The original claim was posted on Facebook and then found its way to Twitter, where it's since gone viral.

This is not Melania. To think they would go this far & try & make us think its her on TV is mind blowing. Makes me wonder what else is a lie pic.twitter.com/JhPVmXdGit

The almost comical slow zoom into Melania's sunglass-covered face set everyone off, as if the cameraman knew something we didn't. Her apparently "offish" appearance then prompted a ton of people to drag up old photos of her and comparing them side by side.

Let me save you some time from looking it up. It's not her. pic.twitter.com/IJjHEzWs8p

Now the whole thing has sparked a MASSIVE conspiracy theory on the internet and the memes are out of control.

I'm over here staring at melania clips comparing nostrils and hairlines like pic.twitter.com/0BGSZ6kw4p

hello it's me, FLOTUS Melania pic.twitter.com/VK5OQprFev

@rhyse Is it me or does Melania appear to be a man in drag here with a wig and large sunglasses on. Can only assume she left trump weeks ago and he hasn’t yet found a way of saying he’s done a great job on the divorce ...I have the best divorce lawyers THE BEST .

I initially didn't notice, but thought it was strange when he said "my wife Melania, she's right here" to try & convince media it was her.

Me: I can't deal with all this fake news, it's harming American democracy

It is I, the real Melania, reporting for duty. pic.twitter.com/6NBMSF7TVV

This is not Melania. To think they would go this far & try & make us think its her on TV is mind blowing. Makes me wonder what else is a lie pic.twitter.com/NCYIJfeVhx

So now we have to ask the inevitable question: Is this the real Melania? We hate to spoil the meme party but yes, it was. All you need to do is have a quick sleuth on Getty Images and you'll find tons of high res snaps of Melania from that day right there for you to feast your amateur sleuth eyes on. Like, it IS Melania, we don't know what else to tell ya.

You know, I want to say "of course that's Melania, not a body double" but things are generally too weird in 2017 to rule anything out