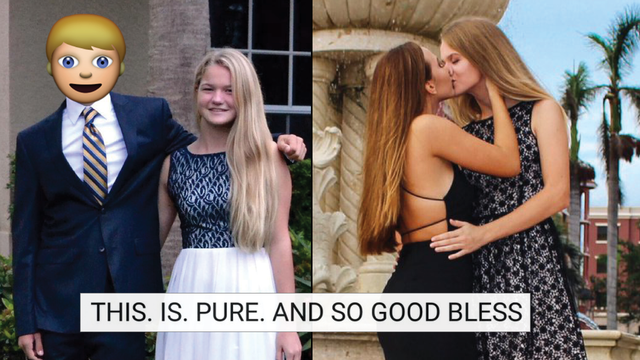 A lot can change during your high school years. Just ask the girls taking part in the #GayGloUp trend on Twitter. Young women are sharing photos from before and after they started dating girls and the pictures will seriously warm your freaking heart.

It all started when one Twitter user, @caitlincrowley_, shared a side by side photo of herself in freshman and senior year.

Freshman to senior year, does this count as a glo up??? pic.twitter.com/zyH1GRE3hw

She captioned it "does this count as a glo up?", implying that she had majorly levelled up after starting to date her girlfriend. People LOVED the tongue-in-cheek caption and the cute AF "transformation". The tweet quickly went viral and inspired other people to join in with their own #GayGloUp.

The photos basically proved how much happier these ladies were now that they were in relationships with other girls.

girl i feel!! still love u though Blake but we look SO uncomfortable @BlakeMirolla #GayGloUp pic.twitter.com/7Ug4oPWCp3

sophomore year prom vs me + my gorgeous girlfriend dressed up for a date (i’m so much more comfortable w myself now) pic.twitter.com/6K0Q3oXPPw

definitely a glo up pic.twitter.com/Ylvz0L7yV6

No shade to the boys, but these "after" photo smiles are incredible. It's pretty obvious that getting to be who you really are is basically the best type of glo up.

Even single people with a sense of humour had to share their gay glo ups. 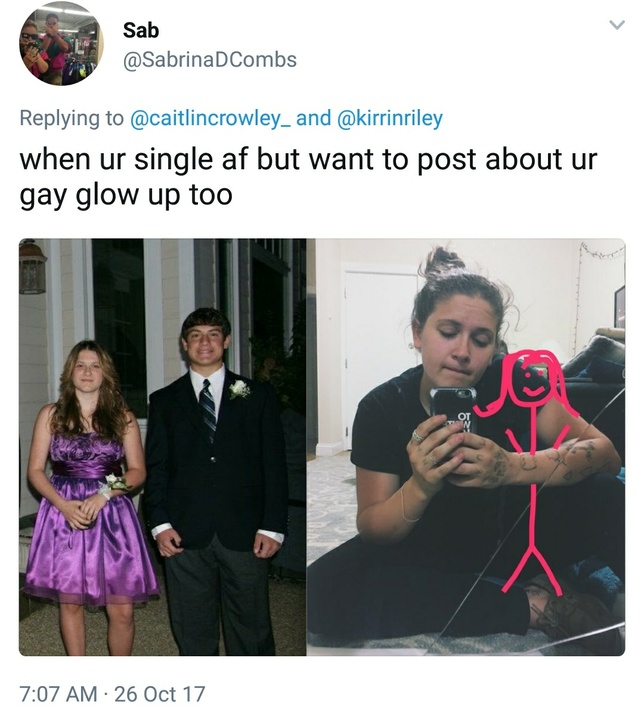 This is so pure, we can't even handle it. Shout out to every girl getting to be with other girls after years of taking awkward Homecoming photos with dudes they weren't really into.