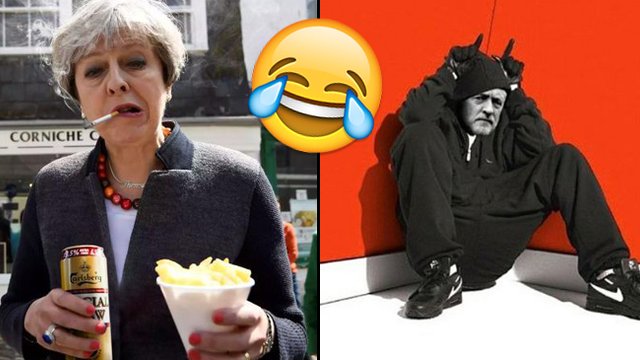 From Theresa eating chips to #Grime4Corbyn, here's our fave memes from this UK election season.

Election season - it's coming UK kids. June 8th will see the 2017 General Election take place as the Conservative party's Theresa May takes on Labour's Jeremy Corbyn among many others in a challenge for the title of Prime Minister.

It's exciting stuff and there are plenty of youth issues at stake, from university tuition fees to the Brexit negotiations. But, of course, there is only one big question on everybody's minds as the campaign enters its final days - what are the best memes of the election?

Don't worry - not only have we done an Election podcast special, we've got you covered meme-wise too!

Everyone was in a pretty big state of shock when the election was suddenly announced back in April. But, hey, at least it brought out the best of us across social media:

'She said she wasn't going to call a general election'
Theresa May: pic.twitter.com/prWcL2qAou

2) The unfortunate facial expressions of Theresa May.

Bless, not the best moment to get caught in shot is it?

And I thought HMS Strong & Stable was supposed to be unsinkable...?

@Conservatives @theresa_may fOr StRoNg, StAbLe LeAdErShIp ThRoUgH bReXiT aNd BeYoNd ThErE iS oNlY oNe ChOiCe At #Ge2017 @ThErEsA_mAy AnD hEr CoNsErVaTiVe TeAm. pic.twitter.com/52Ak8xVIJ5

If this election was won on meme's, then Corbyn and Labour would have a landslide... pic.twitter.com/Yfv3S85bWV

When Jeremy helped hold up a speaker for a colleague making a speech, you just knew the edits would be quick to follow.

He's got his election playlist all sorted:

On a serious note #corbyn #rkelly 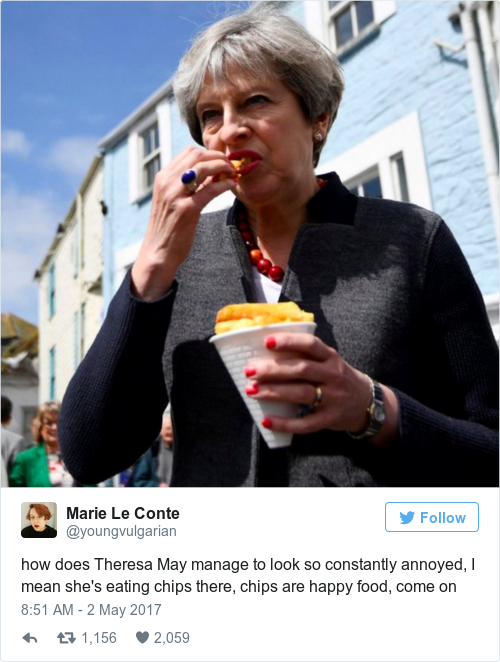 A campaign trip revealed to the general public that our PM is seemingly incapable of eating chips. And chooses to eat them with coffee too - dear god why?

Theresa May was in Devon? Eating chips? And you didn't tell me? pic.twitter.com/SF55BTbZQR

It's the meme that keeps on giving #Theresa #May #chips #PoliticiansFailAtPretendingToBeHuman pic.twitter.com/PeAXD5W5Eh

Me: I don't think I could be any more embarrassed by my country.

Theresa May: Hold my chips & coffee.

This chip shop already has a Theresa May statue. Patron Saint of Chips. pic.twitter.com/7d7wEn708v

Who would have though that the UK's finest Grime music stars would all choose to get on board and back big Jezza?

But they did, and it's kind of amazing:

Amongst the campaigns that inspired us this month were @Nike's #breaking2; #heineken #cookforsyria and #grimeforcorbyn pic.twitter.com/wesj7hJGZC

Theresa May enjoying herself a little too much at #PMQs #Budget2017 pic.twitter.com/YhNz8kW9aX

The laugh heard around the world.

We've had trap remixes, grime edits and more but our heart will always be with this original version of the Conservative candidate's ridiculous choice of music to soundtrack his call to vote. Like stepping into a 1980s wedding disco.

I chime in, haven't you people ever heard of, closing that tax loopholes?

All the best Elmo vs. Rocco memes as their feud goes viral