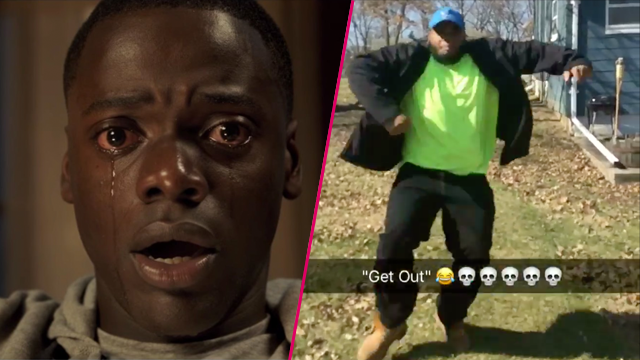 People are risking life and limb to replicate an iconic moment from the trailer for "Get Out" - and it's hilarious.

People are losing their sh*t over how good Get Out is.

Jordan Peele's new satirical horror is turning heads and changing minds everywhere; so it was only a matter of time before it birthed its first proper meme. And it's finally here; in the form of the #GetOutChallenge.

It stemmed from a part in the trailer where a character runs right towards the camera, and makes a sharp turn at the last minute.

It's just one of many examples of erratic behaviour that makes the film itself so eerie. But it's this particular moment that's captured the heart of some of Twitter and Snapchat's most daring users.

Now loads of people are attempting the "Get Out" Challenge.

Some with more success than others.

Grandpa been running ever since he lost to Jesse Owens #GetOutChallenge #ECU #GetOut pic.twitter.com/7SGRW6VcTz

And some with more failure.

Some have put their own spin on it.

And some have even turned it into a sketch.

But best of all - even the movie's official Twitter is getting in on it.

Run for your life. Have you tried the #GetOutChallenge? pic.twitter.com/6piaiP1vMX