This Guy Flew His Helicopter To Get McDonald's Because Why The F*ck Not? 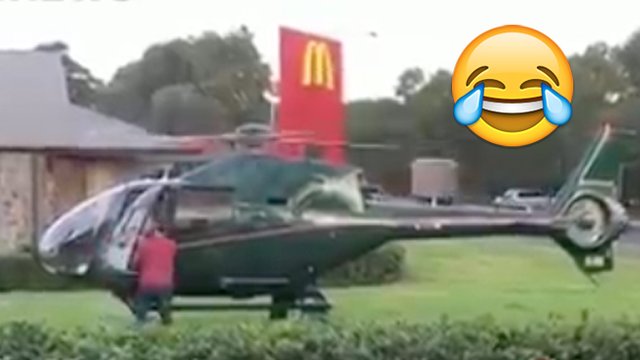 One hungry pilot in Sydney got so desperate for those nuggets he landed right in the parking lot. Luckily for us, there's video evidence.

We all know the feeling - you are on your way to work when suddenly hunger strikes so you go speeding towards the nearest golden arches to fill your stomach with all that nugget-shaped goodness your impatient (and probably hungover) body is craving.

But what if your job involves flying a helicopter? No problem, just make a quick emergency landing in the parking lot. Obviously.

Mashable reports that on Saturday (May 13th) a helicopter pilot with a serious need for food touched down at a McDonald's in northwest Sydney and, while onlookers understandably presumed their must be an emergency, the pilot simply grabbed his meal and took off into the skies once more.

Luckily, someone captured the moment on video for us to all look at it in wonder together:

Of course the pilot took a photo - who would believe him otherwise?

So why the McD's based emergency? Well, many have pointed out that the incident took place at 4.20pm which would certainly explain this attack of the munchies but we somehow doubt this individual would be allowed to fly while stoned.

In fact the pilot, called Dan, rang in to an Aussie radio station saying that he had permission to stop off, that pilots regularly do that kind of thing and even saying to the DJ Kyle that "if you ever need a cheeseburger give us your coordinates of where you live and we’ll drop in with it." What a guy.

So next time you see a chopper moving through the air, chances are they are simply hitting one McDonald's at a time, in search of that one special thing we are all desperate to find...