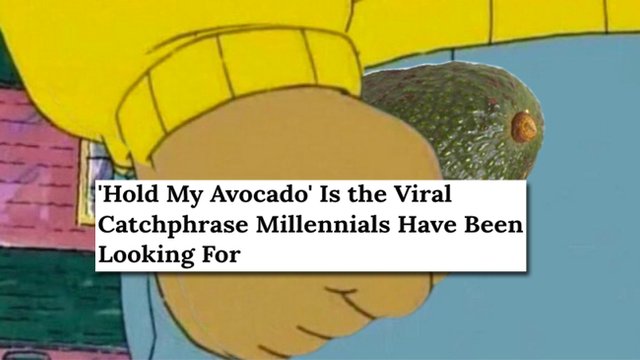 The lovely people at Time seem to think that kids have found a hip new phrase to use involving a certain vegetable that people enjoy on toast.

Of all the very silly things people think millennials do, this may just be the silliest one of all.

Yesteday (August 10th), Time magazine published a story about a new catchphrase supposedly popular with millennials, presumably being thrown around in the conversational gaps between fidget spinner battles and Sarahah insult screenshotting. You know what us kids are like.

So, Time, what is this wonderful, viral phrase you've picked up on that the youth are going crazy for?

So down with the kids.

What? You don't believe that Time really have the finger on the pulse with this one? Well, don't worry, they have receipts:

"We live in the era of peak avocado consumption. The proliferation of all things avocado-related, from overpriced toast to fancy pizza to elaborate art, has become shorthand for the trends and priorities that millennials, in particular, embody. In other words, "hold my avocado" is a quick way to denote the contemporary millennial experience: seeking luxury wellness, but potentially derailed by sociopolitical developments."

Turns out Time got this ridiculous idea from a joke tweet sent by a user named Ken Norton...

Millennial: your generation got houses and jobs

Boomer: yes but we lived with constant fear of nuclear winter

...but even he is taking the p*ss out of the magazine's response:

And the rest of the internet is similarly unimpressed too:

Time: "Hold my avocado... the catchphrase Millennials have been looking for."

Millennials: "Oh, that magazine from the dentist in the 90s."

Someone needs to reply with this, so it might as well be me. . . pic.twitter.com/16YhgVhRKc

Keep holding those avocados guys. It's what all the cool kids are doing.