WATCH: This Awkward Video Shows What It’s Really Like To Work At Hot Topic 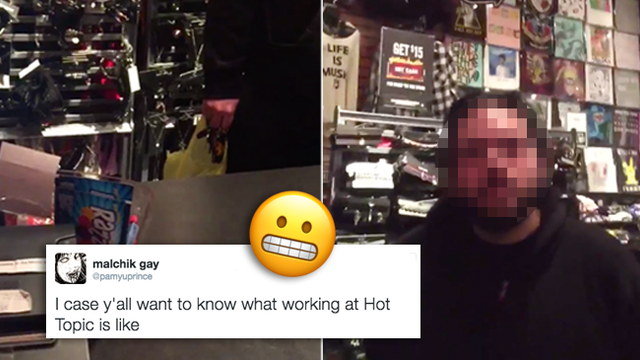 Anyone who has ever worked in customer service or in retail knows *exactly* what it's like to deal with a talkative customer. Twitter user, and Hot Topic employee Jeremy (@pamyuprince) found out what that was like this week and gave us all a masterclass on how to deal with an awkward encounter when you're standing behind the register.

On Jan 2nd, Jeremy posted this video to Twitter with the caption, "I [sic] case y'all want to know what working at Hot Topic is like".

I case y'all want to know what working at Hot Topic is like pic.twitter.com/bm0hXQOItC

At the time of writing, the video has had over 150k likes, 75k retweets and almost 2.1k replies.

According to Jeremy, the conversation started with the customer mentioning that he was in need of some camouflage for his aunt's funeral.

@myohmadi Legitimately, the first thing he mentioned was he had to go buy camo for his aunt's funeral

And it lasted for a total of 45 minutes!

@yenvengerberg THIS CONVERSATION WENT ON FOR 45 MINUTES

In the end, the customer left the store and Jeremy was able to close up shop and leave the mall... with his soul in tact.

Anyway, let's all marvel at Jeremy's customer service skills because lord knows we wouldn't have been able to handle a situation like that as well as what we've just watched. And, um, we sincerely hope the customer has found the perfect camouflage outfit he was looking for.