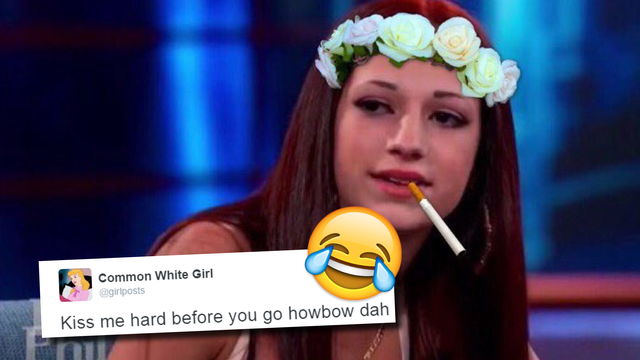 We're only three weeks into January but we've already got some robust memes on rotation. #SaltBae is an internet fave, but I'd like to introduce you to "how bow dat", your new "fight me" aesthetic.

If she was from CT what part of Connecticut would she be from? pic.twitter.com/S9DydTIare

The absolute best part of this exchange is 13-year-old Danielle calling the entire audience hoes.

Where did "how bow dah" come from?

The meme comes from a Dr. Phil show clip in which an out-of-control 13-year-old does some high level mouthing off to a live audience. Dr. Phil comments on Danielle's accent (which is, admittedly pretty unique), to which she responds that its origins are "the streets".

In fact, this is how Dr. Phil described 13-year-old Danielle on his website.

Because of Danielle's accent, "catch me outside. How about that?" quickly turned into "cash me outside, how bow dah..."

And so the internet's new motto was born. People can't stop applying the iconic sound bite to their own lives.

my son: *throws tantrum*
me: "cash me outside how bout dat"

genuinely care about me, my mental health, and my goals in life howbow dah pic.twitter.com/1mI6awikWj

*to obama*
stay at the white house for 4 more years howbow dah pic.twitter.com/n9NLlKXVPQ

Give obama another 4 years howbow dah

Danielle is getting the 'roses are red' treatment just in time for Valentines Day.

Roses are red
My heart is fat
Be my Valentine
Or cash me outside howbow dah pic.twitter.com/qOaMkOHj92

The internet has a long history of making teenagers famous so "how bow dah" is really just a part of a rich tradition. If anyone disagrees, they can cash me outside, how bow dah?