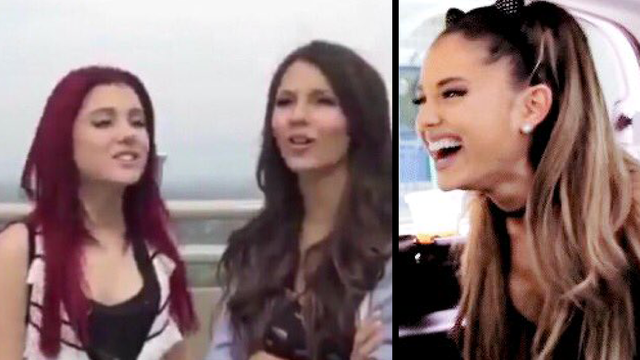 The internet can't handle this video from their "Victorious" days.

One thing the internet does well is turn up old videos and give them new life.

Most of us are probably aware that Ariana Grande wasn't always an international pop sensation. She used to appear on a Nickelodeon show called Victorious, starring Victoria Justice. At that stage, everyone involved was probably focused on becoming a "break out star", so tensions likely ran a little high.

Those tensions gave us this video which I have watched 247 times today.

i tHinK wE aLL sInG pic.twitter.com/jAHbRE8U81

People think Victoria was being salty about not wanting the label of "singer" to go to Ariana. And, as it turns out, that wasn't an isolated incident.

"I think we all are gonna break out and sing or dance" this is why Ariana never liked you Victoria... pic.twitter.com/FwDeTjzyKp

It's understandable. Victoria Justice was trying to build a singing career at the time so it would have been in her best interests to keep the "singer" crown for herself.

Either way, people are howling at the sheer pettiness of it all and now it's a bonafide meme.

Ariana: somethin bout you makes me feel like a dangerous woman

Victoria: i think we ALL feel like dangerous women pic.twitter.com/dscLDCwvc6

"I think we all want to die"

Anyone: I want to d-
Me: I think we ALL want to die pic.twitter.com/QIpMDQA12Z

me: poc have to constantly deal with systematic racism
random white person: i think we ALL deal with racism pic.twitter.com/hT4ur4ullh

Some of the jokes are honestly so meta.

DW: My Everything you got 2 grammy nominations

ME: yes you got 2 Grammy nominations too

Yours truly: i think we all got Grammy nomination pic.twitter.com/KTFirhgYOe

A callback to much simpler times

Ariana: I hate America-
Victoria: I THINK WE ALL HATE AMERICA pic.twitter.com/tYpTxacUtI

I think we ALL know that ya'll can turn 19 seconds of video into the meme of the month. Good job, internet!