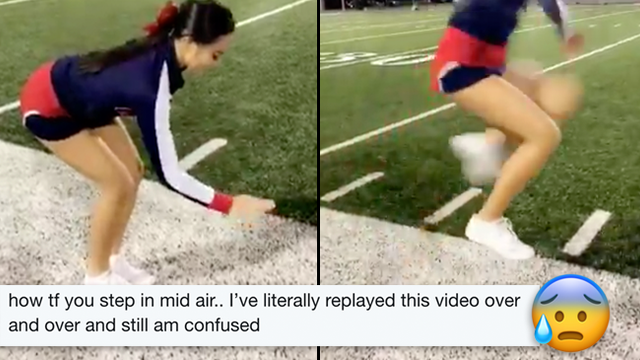 Honestly, what kind of witchcraft?!

If you thought you were going to escape 2017 without another one of those viral video challenges taking over your life, you thought wrong. People of the internet, brace yourselves because this time, it's truly WILD.

The latest viral video challenge to take over the internet is the 'Invisible Box Challenge'. The trend, started by Anderson University football player Dontez Hines, was brought back to life by cheerleader @arielo1220 on Twitter and it's gone VIRAL and everyone is trying to do it.

but wait, there's a pt 2 pic.twitter.com/b8JBgeRZdh

Some people are absolutely NAILING it.

Others are absolutely NOT nailing it.

Some just really haven't quite grasped the concept.

the best one yet  pic.twitter.com/HQdoqFNuC0

Honestly, what kind of witchcraft?!

how tf you step in mid air.. I’ve literally replayed this video over and over and still am confused https://t.co/GKenOcoCOh