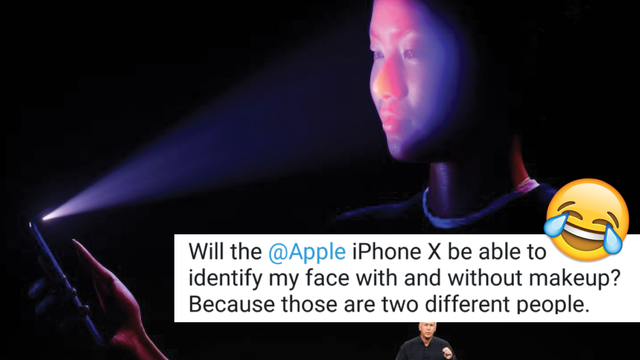 "Does the iPhone X have FaceID for all the two-faced people in my life?"

It was a big day for Apple, but that didn't stop people on the internet from doing what they do best. From "two faced" people to cheating partners, people jokingly wondered what kind of trouble this new facial recognition software would get them into.

People wondered if their love of makeup was going to complicate things.

Will the @Apple iPhone X be able to identify my face with and without makeup? Because those are two different people. #AppleEvent #iPhoneX

The new iPhone face ID will be a problem for me... when I take my make up off itll think a naked mole rat is trying to get into my phone

FentyBeauty just came out... I will be wearing heavy layers of Makeup... The real is.... Will that IPhone 8 FaceID thing recognise me... pic.twitter.com/WOUe3YM3Xf

Jaqen H'ghar just became a problem for a lot of people.

Do y'all know who I'm worried about when it comes to unlocking d new iPhone X thru face recognition? pic.twitter.com/cMi0XaNIIU

And Arya, of course.

A girl has no Home Button. #FaceID #iPhoneX pic.twitter.com/4U807gBciT

Others are a bit worried they might be alittlee...generic looking.

My worry is if I use my face to unlock my iPhone x then any generic white guy will be able to access it.

And it's pretty much-guaranteed that Face ID is going to try and sass you in one way or another.

"Time for your quarterly cosmetic surgery."

Some people think girls will adapt and start setting up a long con.

Caution!! don't let her take selfies with your iPhone X. She's really setting up Face ID for her access to your phone. Simple pic.twitter.com/rKKGiCLrWj

For some reason, people were really worried about all the two faced people in their lives.

Okay but does the iPhone X have FaceID for all the two-faced people in my life?

People are sure it will work because of how...um...unique looking they are.

iPhone 8 now introducing face ID! Now I know my phone is safe cause nobody is as ugly as me

The CIA during this Face ID announcement pic.twitter.com/fDwR72THUc