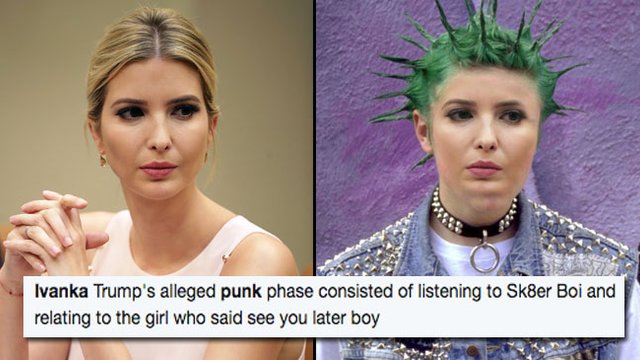 The first daughter of the USA claims she once had blue hair and listened to Nirvana.

Ivanka Trump, the daughter of former The Apprentice host Donald Trump, caused an inadvertent stir on social media last night (October 17th) as word reached us that the President's daughter once had, wait for it, a "punk phase".

Yeah, we don't really know what to think either!

According to an extract from her mother's new book 'Raising Trump', Ivanka claims she once sported some Good Dye Young-esque blue hair and was a big Nirvana fan, even crying when Kurt Cobain died:

Ivanka is trying to take away our heritage!! OUTRAGE!!! Grunge is not Punk. https://t.co/SQDDFOrbuu pic.twitter.com/SHtE1pYom3

I mean, Nirvana weren't punk, they were grunge, but still...

Anyway, funnily enough, many people on Twitter couldn't quite picture the typically straight-laced Ivanka listening to 'Lithium' and so 'Punk Ivanka' instantly became a meme we can all believe in.

"I once listened to Dookie while taking a spin class at the Racquet and Tennis Club." https://t.co/U687fYHTbi

Oh, and don't worry - there were plenty of fun pictures too!

I CAN'T WAIT for the Ivanka Trump punk memes to begin! pic.twitter.com/ceL34Uum5D

Ivanka Trump: “I had a punk phase” pic.twitter.com/WL8xeNZYQ3

Ivanka Trump said she had a "punk phase" so here's proof pic.twitter.com/edkDhgtKbn

Ivanka Trump, punk as fuck in Aspen in 1998 pic.twitter.com/dWFg5zLOXD

Even Pete Wentz himself got involved:

Cause Ivanka be anarchy https://t.co/YNUrPXf7S0

Never let those pesky anti capitalist ideologies get in the way of your punk phase pic.twitter.com/a4aN3fnagn

So, basically if you see Ivanka hanging out at Warped Tour next summer, now you will (sort of) know why.