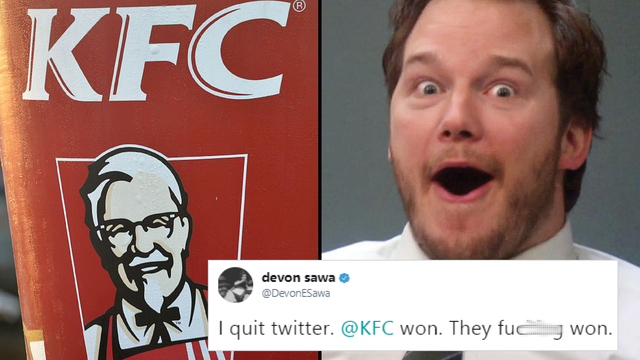 Did you know that KFC only follows 11 people on Twitter? That may seem like a totally random number but, while we were wallowing here in 2017, KFC has been patiently waiting for us to catch up to 3017.

Some eagle-eyed internet sleuths realised why KFC only follows 11 people on Twitter and the reason will probably keep you up at night.

First of all, let's take a look at who KFC follows, shall we?

Here we have all the members of iconic Brit pop girl group, The Spice Girls. We also seem to have an over-representation of verified Twitter users named Herb. Hmm, interesting.

It's all pretty innocuous until you realise that KFC's original recipe famously includes "11 herbs and spices".

11 Herbs & Spices. I need time to process this.

It's been brought to my attention that @KFC only follow 11 people. The Spice Girls and 6 guys called Herb. 11 Herbs and Spices. Mindblown..

And everyone is giving props to the genius behind the gag.

the person that runs the KFC account needs a raise. I don't care how much they make now. GIVE THEM A RAISE.

You guys. Go check out who @KFC is following, it is genius and props to the social media team!

The .@kfc social media manager planted a low-key genius bomb and it just went off https://t.co/Abtx0rDlIO

Everyone pretty much agreed that KFC won the whole damn internet.

This terrifying Karen Halloween mask will give you nightmares

What is the period challenge? Instagram's viral craze explained

Addison Rae: 12 facts about the TikTok star you need to know

QUIZ: Answer these 6 random questions and we'll guess your height

Ashley Tisdale announces she is pregnant with first child

28 Julie and the Phantoms memes that will give you life