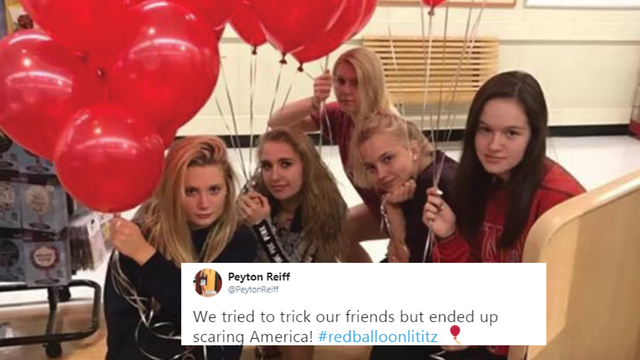 We would be freaked out too, TBH.

Police in Lilitz, Pennsylvania were sufficiently freaked out this week when they discovered ominous red balloons tied to sewer gates in scenes reminiscent of the upcoming movie, It.

It is the film adaptation of Stephen King's iconic horror clown opus, out in theatres this month. The killer clown, Pennywise, is known for carrying red balloons and luring children to their deaths. You know, casual stuff.

The trailer for the film is pretty terrifying, so we get why the police department had a total WTF moment.

In a Facebook post, the police department admitted that they suspected it was a prank but were still "completely terrified" as they removed the balloons.

The prank eventually went viral because people were freaked out to see clowns back in the headlines after The Great Clown Panic of 2016. The prank even gained national attention because of It's upcoming release.

Now, the masterminds behind the prank have stepped forward and claimed responsibility for freaking out their town. The perpetrators were...drumroll please...five teenage girls.

One of the girls shared exactly how they pulled off the prank on their last night of summer break and we are kind of impressed. 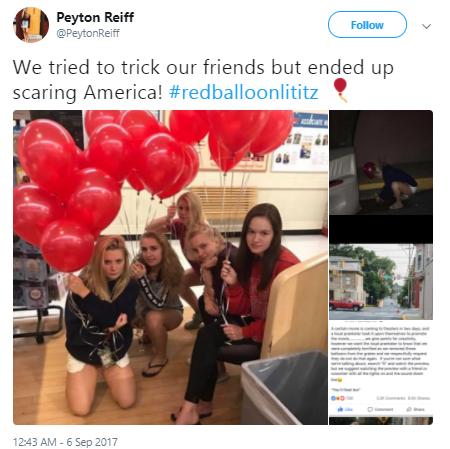 One of the pranksters, Peyton, wrote about their adventure on Facebook and we kind of wish they'd recorded the whole thing.

"Our plan was to tie red balloons to sewer drains around our piers from school houses to geek them out since the new IT movie is coming out this Friday and we knew kids from our school would know about this!"

"When we woke up we saw the Lititz Police had responded to the balloons and were frightened which wasn't our intent but we are glad to see they understood what it meant and got a good laugh out of it! Don't worry no clowns here in Lititz just 5 teenage girls having fun!"

The comments under Peyton's Facebook post are full of people congratulating her on a prank well executed. It sounds like they meant to prank their schoolmates but America clearly still has some clown issues to resolve. Anyway, we're obsessed with these teenage girls.