Nicki Minaj's 'Roman Holiday' has been transformed into a viral meme...

'Roman Holiday' memes are breaking the internet and, honestly, they're as funny as Nicki Minaj herself.

It's no secret that Nicki Minaj is a meme queen. Ever since the start of her career, Nicki has captured people's attention with her wicked sense of humour and undeniable talent. Her iconic verses and hilarious antics never fail to entertain and impress us. With that in mind, it's no surprise that she regularly inspires viral memes. From 'TO FREEDOM!' to Tom Holland, Nicki is always at the forefront of meme culture and now her 2012 hit 'Roman Holiday' has become a meme.

Check out the best Nicki Minaj 'Roman Holiday' memes below.

Longterm fans of Nicki will be well aware of 'Roman Holiday'. The ambitious song initially divided critics upon its release but it's since become a fan favourite thanks to Nicki's animated performance and rapid fire verses. Not only that but it also sees Nicki channel her gay alter-ego Roman Zolanski and interpolate 'O Come All Yee Faithful', as she raps about being sent to conversion therapy. It's bonkers, ballsy and ultimately brilliant.

If that weren't enough, Nicki debuted the song at the Grammys with a priest and acted out an exorcism on stage. It was the first time a female rapper ever performed a solo song on the Grammys stage. Given how manic the song is, it's the perfect template for any meme. The 'Roman Holiday' memes have appeared here and there on social media for months but just recently they went viral and now they're everywhere.

You just speed up a video of your choosing and play the song in the background or create something new.

We have 'Roman Holiday' on a dress.

An essential in every wardrobe.

All 'Game of Thrones' episodes would be dramatically improved if they featured Nicki Minaj songs.

Even the recent James Charles drama has reached the meme.

I don't even know how to explain this Simpsons one.

Lady Gaga has been given the 'Roman Holiday' treatment.

this is INSANE! the power of fashion #MetGala pic.twitter.com/fyx0VtD5ot

Lady Gaga even retweeted this.

Shrek's in on it too.

everyday i add a new video to my collection of roman holiday memes. this one’s my favourite so far pic.twitter.com/didXkkUbTe

Seriously though, this is getting serious.

one day psychology teachers/professors will use seeing a sped up video and automatically hearing roman holiday by nicki minaj as an example of classical conditioning...mark my words it will replace pavlov’s dogs

Professor Minaj will see you now.

This new synesthesia test tells you what colour your name is

The Broom Challenge is breaking the internet but is it a hoax?

Billie Eilish's reactions at the Oscars have inspired the funniest memes 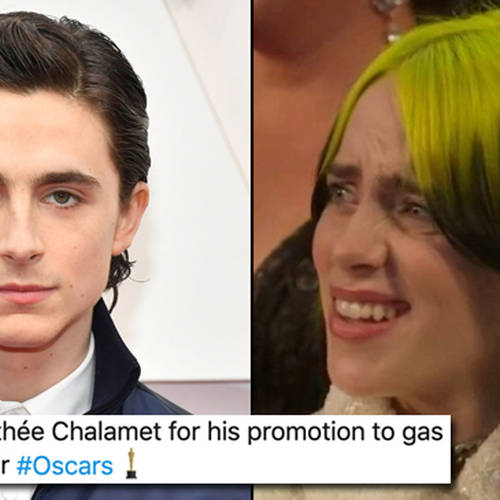 All the funniest memes from the 2020 Oscars

Billie Eilish: 18 facts about the No Time to Die singer you probably never knew

Insatiable has been cancelled by Netflix

YUNGBLUD: 15 things you probably didn't know about the up and coming artist