Can You Spot What's Wrong With This Mom's NSFW Throw Pillows? 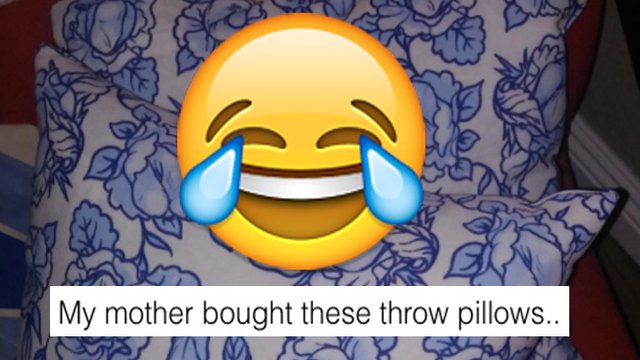 This mom's choice of cushion has just gone viral for all the wrong reasons.

A mom's flower-patterned cushions have become a viral sensation after Reddit users discovered that the plant's featured in the design look a lot like, well, um...a bunch of d*cks.

A Reddit user posted the NSFW photos, quickly gaining over 1000 comments as the comments section tried to trace the origin of these phallic pillow cases.

So how bad do they look?

My mother bought these throw pillows.. from funny

But, as Mashable discovered, according to her daughter the owner is actually delighted with the hidden willys on display:

"They stay in the living room on the couch year round. Everyone that has noticed them loves them, most people don't notice the penises because they would never expect them to be there but once they are pointed out (and someone always points them out) everyone gets a big kick out of it."

Oh, and if you want to grab your own floral c*ck items, they are the brainchild of illustrator Coey Kuhn who has since launched a full collection via online retailer LOOK HUMAN that you can check out here.

It's certainly a great conversation piece.