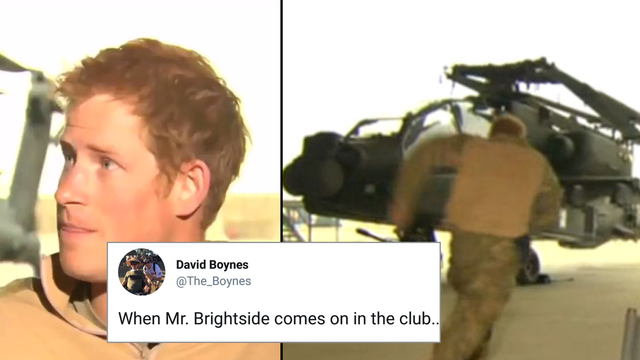 When you're waiting to use the restroom at the club and your favourite song comes on.

A dramatic video of Prince Harry running off during an interview has officially become a meme and we've never related more to a member of the royal family.

According to knowyourmeme, the original video of Prince Harry running into battle was posted in 2013, but it's only just begun to cultivate the meme life it deserves.

Skip to 0:33 in the original video for the meme's humble beginnings.

5 years later, this gem of a tweet summed up the panic of being outside when Ariana Grande's "Into You" starts playing.

Anyone who has ever been to a club KNOWS they play the best songs when you're in the smoking area or waiting to use the restroom. So, of course, the Prince Harry running "in the club" meme became too relatable to resist.

When Yonce says get in formation she means GET IN FORMATION.

When you in the club chilling & Formation come on pic.twitter.com/Av0QBWgPFN

We're not walking to get in formation, okay? We. Are. Running.

me when im at walmart and hear the yodeling boy start singing from the other side of the store pic.twitter.com/GGMagGEFlF

When Mr. Brightside comes on in the club.... pic.twitter.com/49w7aNXnuq

I'm very sorry, but you know this is my song.

When Gasolina comes on in the club pic.twitter.com/7E8mzcXSPM

Petition to change the national anthem to "Knuck If You Buck"

When alphas hear this song in the club: pic.twitter.com/ffjWyrFW7X