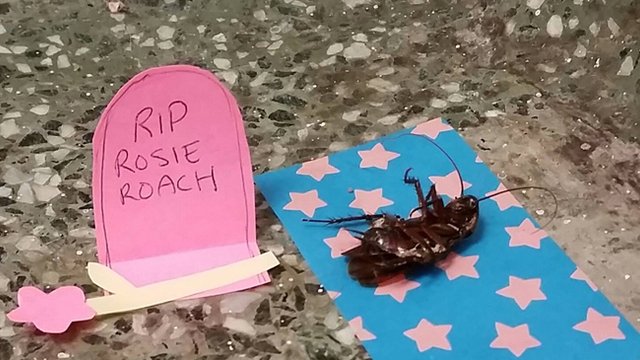 We hear of so much negativity in this world that the positive is often overshadowed. But what you're about to see will restore your faith in humanity.

Earlier this month, it was reported that a cockroach had passed away in the Anthropology building's stairwell by a Professor at Texas A&M University. The incredible tributes were first displayed on Facebook by said Professor, and they were soon posted to Imgur by user jimmyevil for the rest of the world to see.

Here is the moving story of Rosie Roach's last days in this vicious and unjust world.

It all started on December 3rd when kind soul laid a paper flower at the scene.

As tributes continued to pour in on December 5th, Rosie was placed in a roach-sized coffin and a candle was lit in her honour.

On the same day, she was lifted onto a pyre and left to lay in state.

A noticed was posted above her shrine that read: "Rosie the Roach will be with us until Tuesday, December 14th when a celebration of her life will be conducted. Food and drinks will be served in the main office during the afternoon."

Poetry and currencies were left from mourners all around the globe. One generous soul even left a joint at the scene to ensure her sendoff would be LIT.

The morning of December 17th. We'll never forget where we were the day we finally said goodbye to our fallen hero.

Farewell, Rosie Roach. You were too good for this cruel world.

Please leave your well wishes and tribute to Rosie's family in the comments below. We'll pass them on.