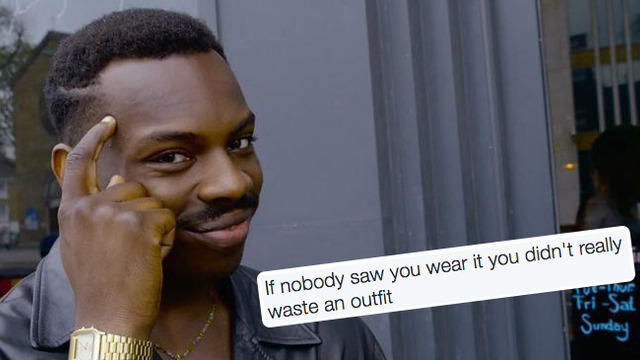 Sound the alarms! There's a new meme in town. You may have come across a picture of a guy smiling at the camera, pointing to his head like he's just had the most brilliant beyond brilliant idea? That's the Roll Safe meme and it's blowing up on Twitter right now.

Where did the meme come from?

The meme originated from a clip from BBC Three's #HoodDocumentary of Reece Simpson, aka "Roll Safe", played by Kayode Ewumi.

The origin of the now legendary meme. pic.twitter.com/jcDKO0rr0j

The show originally aired in June 2016 but the clip wasn't flipped into a meme until @FootyHumour used it to describe the petty logic behind annoying your girlfriend on purpose so you can spend time alone.

When you piss her off on purpose, so she can say goodnight at 6pm and you can just play FIFA for the rest of the day in peace. pic.twitter.com/UrM5QvrV5A

The still from the show has now been turned into one of the most pettiest memes on the internet, dishing out the best life advice and lighting up the timelines with some pretty deep critical thinking.

If nobody saw you wear it you didn't really waste an outfit pic.twitter.com/k8CHU9Mqs2

No one can hurt you if you detach yourself from everything and avoid becoming emotionally invested in anyone pic.twitter.com/VavUoE91YH

You wouldn't be offended if the tweet didn't apply to you. pic.twitter.com/skgOT9huHp

If you get curved twice then you didn't get curved at all. Two curves make a circle which means you're at your starting point pic.twitter.com/fBqscgJw2h

my man can't break my heart, if my man doesn't exist. pic.twitter.com/uZqRCvcQyt

They can't ignore you if you don't hit them up pic.twitter.com/6A7WEyvkM4

Roll Safe is now the third meme of the year following in the footsteps of #SaltBae and Cash Me Outside. Welcome to the team, R.S. - February's first official meme.

So I have updated the meme calendar for February 2017 pic.twitter.com/lLNPCMPehz

(Or maybe it's the fourth... does the dancing Winnie the Pooh one count?)