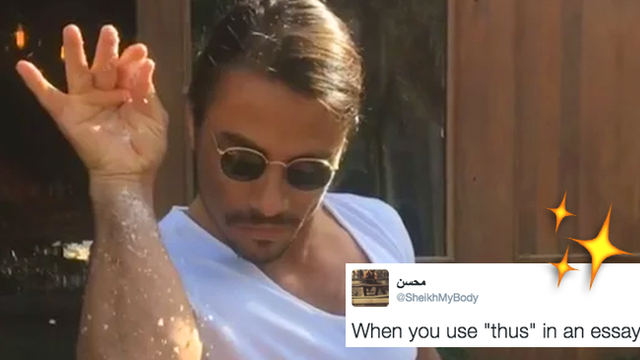 Please welcome to the stage: the first contender for Best Meme of 2017.

You know that GIF of Rihanna winking and sprinkling magic? Well, that's been cancelled. We've got a new wink and sprinkle in town and his name is Salt Bae.

Over the weekend, an Insta vid did the rounds of a chef from Turkey sprinkling salt onto a rather mouthwatering piece of meat. It's not ideal viewing for the veggies out there but here it is - and it's truly a sight to be seen. It's had over 3 million views in three days and it's mesmerising.

The sultry chef in question, Nusret Gökçe, has now affectionately been renamed as 'Salt Bae' and has been turned into one of the first internet breaking memes of 2017. Salt Bae is now on hand to help illustrate your thoughts and feelings, especially when you're purposefully trying to "do the most" or need to embellish a story to make it sound a little juicier.

Like when you're trying to scam your friends into thinking you want to go out with them.

When someone is making plans you have no intention of going to, so you add "what time?" For decoration
https://t.co/PwAJ3HhrNO

When you dazzle your teachers with some literary flair.

When you use "thus" in an essay pic.twitter.com/LgC27qdzXe

When you finish off your look with a few dashes of that Anastasia Beverly Hills illuminator.

when your makeup is almost complete but you still gotta add that touch of highlight pic.twitter.com/RzNbTbymor

When you feeling brave so you rat on your siblings.

When your sibling is already getting shouted at and you remind your mum of other bad things they have done pic.twitter.com/X8Z4zXeRyX

When you don't wanna sound to harsh in a text so you just add a little something extra.

me putting "lol" at the end of a one word text so i don't sound rude or bored https://t.co/Y6fHTm5RSi

When you feeling generous so you treat the kids to a little bit of extra footage.

Not only is he King of doing the most, Salt Bae is a heartthrob in the making. And he low-key reminds everyone of Juandissimo from Fairly Odd Parents.

Never leave us, Salt Bae. Please. You're the hero we've all been waiting for.

You vs the man she tells you not to worry about pic.twitter.com/QeXqj8upj2