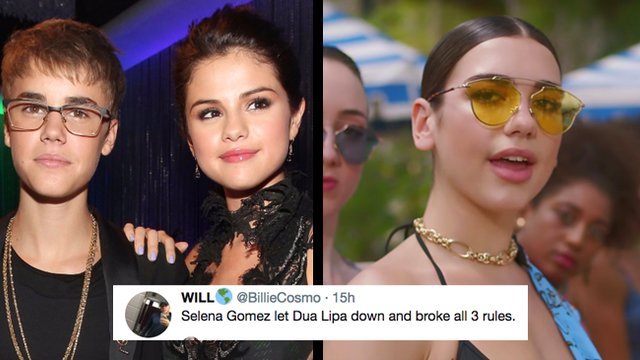 Dua Lipa is not very happy with Selena.

While we were all having a nice time catching up on Stranger Things and doing nothing else this weekend, some people were making incredibly bad decisions and catching up with their ex. And by 'some people' we mean Selena Gomez.

That's right. Selena and her former boyfriend Justin Bieber were pictured grabbing a coffee in LA this weekend (29/10) and then Selena was later spotted visiting Justin's church. We're not sure what's going on but all we know is that The Weeknd, Selena's current boyfriend - who is currently on a world tour, has unfollowed some of Selena's friends and family on Twitter and Instagram but not Selena herself. #Drama

While we all loved Jelena when they first got together, the pair have had a somewhat problematic relationship since and it reminded many people of the inspirational messaging behind Dua Lipa's recent hit single "New Rules", in which Dua gives sage advice to other women on how to avoid your ex.

Justin Bieber and Selena Gomez spotted having breakfast together. pic.twitter.com/3pbZKRYIPo

New rule: everyone must listen to "New Rules".

Selena must not have heard New Rules by Dua Lipa pic.twitter.com/Cl1QH0YdPA

Dua is going to be so pissed at you, Selena.

"Selena and Justin are together"

Selena has strayed from God's light but Dua will help her get back.

Dua Lipa on her way to gather Selena for breaking the New Rules and being friends with JB. Get her sis @DUALIPA! pic.twitter.com/xrOBG3j6xf

Actually crying that someone made this video.

The old Taylor would. Not so sure about the new one tho...