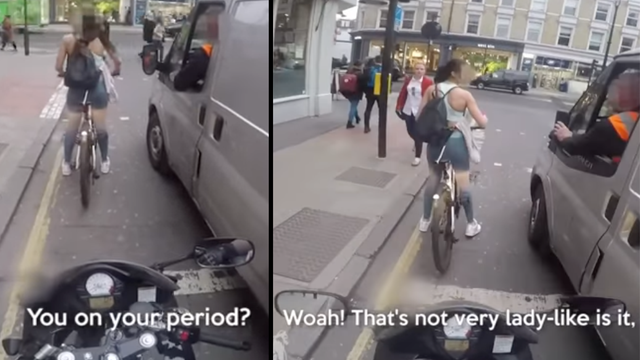 Don't mess with her.

For a lot of women, catcalling is an ugly part of daily life. Some women become so desensitized to it that it's easier to just go on with their day than to acknowledge every instance of this bad behaviour. But cat callers be warned. Some women are definitely not here for harassment of any kind.

An unidentified cyclist got her revenge on camera after a pair of van drivers inundated her with sexist remarks at a red light. They called her a "dog", asked if she was on her period, and then asked for her number and attempted to grab her. Even though she asked to be left alone, the two drivers continued their harassment.

When the light eventually turns green, the woman doesn't just let the universe handle it. Ooooh, no. She takes matters into her hands in the most badass way possible.

We're not saying you should do this the next time someone grinds your gears but it should definitely be a lesson for harassers who think they're entitled to say and do anything they want.