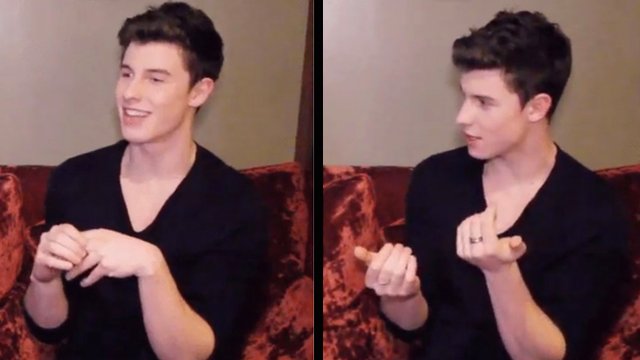 This is Shawn Mendes. He writes nice songs and looks pretty, amongst other things.

Shawn has a fairly large following in the gay community who, despite Shawn's statements to the contrary, like to imagine he's gay. I can't for the life of me think why.

Anyway, over the weekend a short clip of Shawn in an interview that was quickly turned into a meme on Gay Twitter. In the clip, Shawn is seen to be explaining something to the interviewer while absent-mindedly gesticulating with his hands, which many have now used to joke about retelling stories from their closeted past.

1. It all started off innocently enough.

me explaining why i want the girl toy at mcdonalds pic.twitter.com/UjABANSGdJ

me explaining to my cousins why i picked princess peach on Mario kart pic.twitter.com/zcbik7BHVU

3. And it had absolutely nothing to do with the fact that 'Bad Romance' is one of the best pop songs ever written.

Me in middle school explaining why Lady Gaga is my favorite singer because she's "sexy" and "I wanna fuck her" pic.twitter.com/gJLA5z7oPN

Me that time I did a uni presentation about Can't Hold Us Down and what it did for feminism in pop music pic.twitter.com/2sjLUTFTbP

Me explaining why I always picked Nina in Tekken when I was a kid pic.twitter.com/qO097XdTRS

7. Crash was nothing without Coco.

Me explaining as a child why I always pick Coco's levels in Crash Bandicoot: Warped when it was my turn. pic.twitter.com/NqQnehS7Bn

8. Such a shame I can't play football because of this damn recurring leg injury...

Me explaining to my gym teacher why I wanna walk around the track with the girls instead of playing football pic.twitter.com/03jkFDjb3T

10. It's a sociology experiment, I promise!

Me explaining to my dad why me and my roommate share a bed pic.twitter.com/DdhR3pScs9