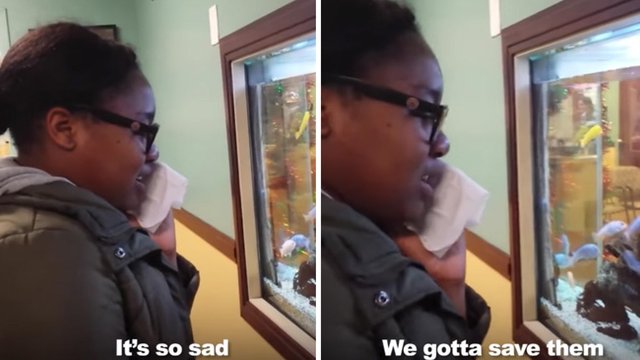 One of the earliest videos to go viral on the internet is the David at the dentist video.

For those who don't remember, seven-year-old David goes to the dentist to have some teeth removed. As he waits in the car to be driven home after the procedure, he is feeling a little fussy from the anesthesia and his dad films him pondering his own existence and uttering the now infamous words, "Is this real life?". The video became an internet sensation. Here's what he looks like now.

And now, a new addition to the illustrious history of LOL-worthy anesthesia videos: the sobbing girl who thought the fish were drowning.

In this video, Leila, a girl who had just gotten her wisdom teeth out,leaves the dentist only to stop and start crying when she see's the fish tank. When someone asked her what was wrong, Leila said she was crying because the fish in the tank were drowning. Needless to say, the video is fucking hilarious.

We hope you're feeling better now, Leila! Thank you for bringing such joy to the world. We needed it tbh.