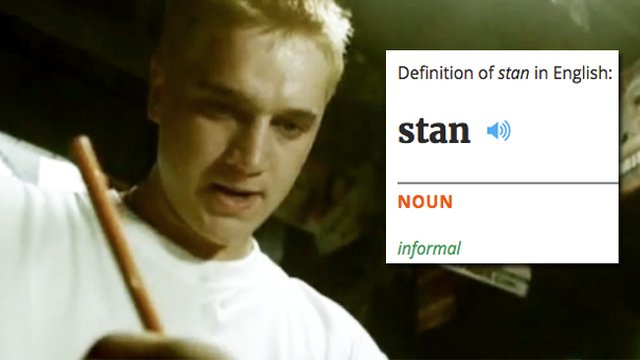 Your fave slang term just made it into the actual Oxford English Dictionary, although we do have some questions...

You've been using it for years but finally one of our most used slang phrases has made it into the Oxford English Dictionary.

Yep, at long last, we are all offcially Stans.

Taken from the Eminem song of the same name, a Stan has long been Tumblr's fave expression to describe any fan that really goes IN. And now the dictionary officially defines the term as "an overzealous or obsessive fan of a particular celebrity".

They even give an example use of the phrase:

"He has millions of stans who are obsessed with him and call him a rap god."

Seems pretty accurate to us.

Although, we do have to pick them up on a couple of details as, in our superfandom, we tend to think of ourselves not as "obsessed" or "overzealous" but more as "keen observers of the songs/fashion choices/home addresses of our fave artistes". You know, just normal stuff. Don't fan-shame us dictionary!

In the meantime, keep on stanning kids!