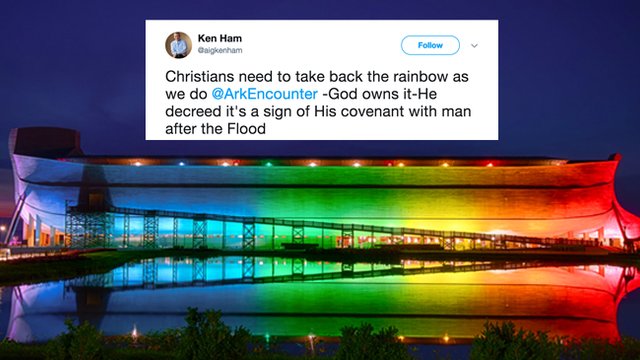 Think again. Meet Ken Ham, who is the president and founder of the Creation Museum, which is also home to a life-size Noah's Ark.

The @ArkEncounter is lit permanently at night with a rainbow to remind the world that God owns the rainbow & is a sign of His covenant pic.twitter.com/U0dmKnXV2v

I must say that is a very impressive ark.

He recently tweeted out images of the ark adorned with rainbow lighting. Sounds like a nice idea until you realise Ken hoped to "take back" the rainbow.

Christians need to take back the rainbow as we do @ArkEncounter -God owns it-He decreed it's a sign of His covenant with man after the Flood pic.twitter.com/cNR51zTbPX

"Who do the gays think they are? Coming over here, stealing our rainbows" etc...

Well, instead of demanding the rainbow is reserved for LGBTQ people only (it's not - we're happy to lend it out from time to time) the gays of Twitter decided to get even - by claiming the ark as one of their own and calling it "a queer icon".

no the boat is gay https://t.co/d0VotDaF0k

Will you have a gay animal couple in there?! Penguins are overplayed - I say make the dinosaurs you have in there gay! JurasSICK!

It's true: boats are older and gayer than Judy Garland.

I checked the gay agenda and boats are definitely gay pic.twitter.com/aIDjP6BqUt

#gayboat finally came out today but he's been dropping hints for years. congratulations on living your best life. pic.twitter.com/o7pKKNJw1i

Her REAL name tho...

So, what have we learned today? Well, don't try to "take back" the rainbow from Gay Twitter and some ships are gay - get over it!