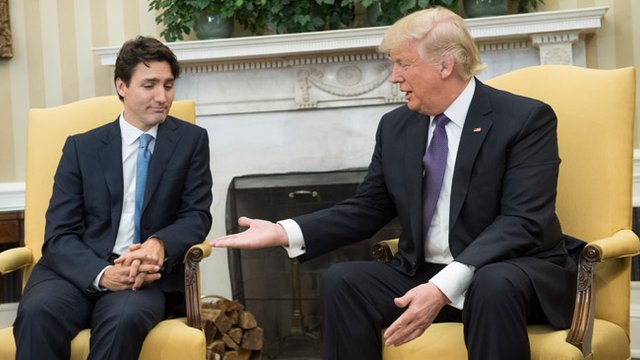 It all started with a handshake.

President Donald Trump and Canadian Prime Minister Justin Trudeau met for the first time yesterday and thanks to one photo their meeting has already become a hilarious meme, because of course it has.

Woke bae Trudeau isn’t exactly a massive fan of Trump for exactly the same reasons most people are, so there was some trepidation as to how the meeting would go down. Whether it went well or not, the internet seized upon a photo of a hesitant-looking Trudeau as Trump offers him…his hand.

You know, the tiny hand? The hand which Trump uses to give really awkward hand shakes? The one with the pee pee in a Russian hotel? The one that does all the grabbing with?

Sometimes the gods really do shine down upon us...

1. It started with a handshake, how did it end up like this?

We are all Justin Trudeau pic.twitter.com/vjJlQB8mOf

2. It would be your first thought though, no?

Justin Trudeau is looking at Trump's hand like he just read the Russian Dossier pic.twitter.com/XGpGF7O7LG

3. A lesson to carry hand sanitizer with you at all times, folks!

Trudeau as he realizes that he left his hand sanitizer back in Canada: pic.twitter.com/5er4RhP4Kv

5. You can always count on one person to make this about Harry Potter.

Looks like someone saw that Shinzo Abe gif pic.twitter.com/MUsHfuxspc

8. Then the photoshopping really started getting out of *ahem* hand. 10. Where are the lost boys when you need them? 11. This one's really funny until you remember Trump actually does have the nuclear codes. 12. Putin was there in spirit.

13. Coincidentally, Trump and Trudeau are the last two players of Pokemon Go left on earth. 14. WARNING: Once you've seen this next picture, you won't be able to unsee it. Someone help that innocent pussycat before it's too late.

16. The size of his hands aren't the only thing Trump is still adamant about. Well done, Internet. You did us proud on this one.