The Internet Is Freaking Out About This Girl's Optical Illusion Selfie - Can You See It? 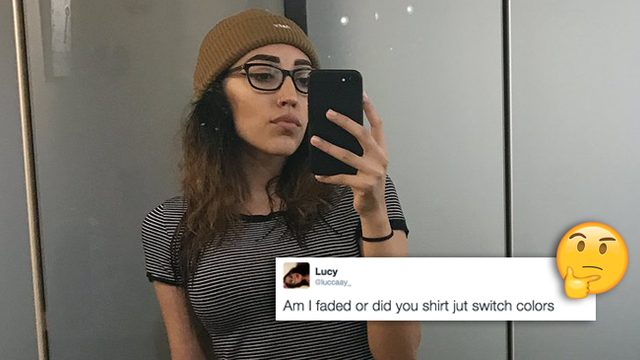 When the clock struck midnight on January 1 2017, we made one wish to the universe - please, PLEASE let 2017 be a year without colour changing articles of clothing. Well, we're now 5 days into the new year and our wish has been denied and we're freaking out once again.

Please, welcome to the stage... the cropped t-shirt!

When you scroll past the tweet on your timeline on your phone, the top looks like a regular striped top. Nothing to see here, everything is nice and normal.

BUT HERE'S THE GAG: When you tap on the picture within Twitter to expand the image... WITCHCRAFT. The stripes morph into some kind of monochrome optical illusion, making the shirt look like it's been photoshopped before our very eyes.

The internet can't get their heads around it.

@mmmadelinee it even changes when you zoom into wtf

Am I faded or did you shirt jut switch colors https://t.co/pzUi8jEBPj

Apparently, the crop top appears differently when you expand the image because of *drumroll* ...the pixels. And it always happens when thin stripes are involved in some kind of digital image thanks to a process called 'Aliasing'.

@mmmadelinee for anyone wondering it's called aliasing, the image is reconstructed with sharp pixels affecting how your eyes perceive images

When you zoom in on the expanded picture? Order is restored. Horizontal stripes for days.

In conclusion, it's not that deep. It's literally just your phone's pixels playing tricks with your eyes. As you were, everyone.