Sorry, That Viral 'Weather Boi' Video Has Been Revealed As Fake Because The Internet 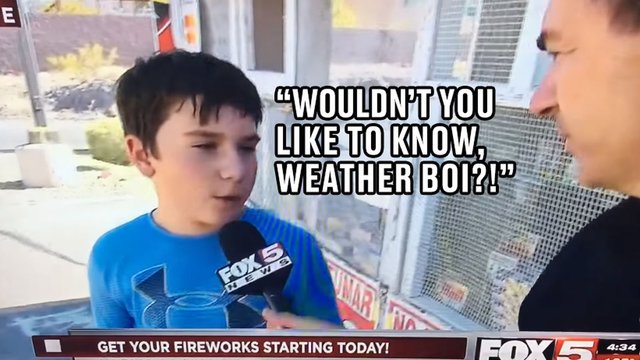 The most hilarious comeback on YouTube was sadly staged as the internet tracks down the reporter and the kid himself.

Earlier this week, the most savage video hit YouTube, instantly spreading online as we all fell in love with the greatest insult of 2017 - 'weather boi'.

The clip, taken from a local FOX News broadcast in Las Vegas about 4th of July fireworks sales, saw a newsreporter get burned by a kid outside a store who was not willing to play along with his upbeat banter.

The meme spread fast too, with video views racking up on YouTube, Twitter and Facebook as the world fell in love with the term 'Weather Boi'.

But, tragically, like most things on the internet in 2017, it all turned out to be fake news, with the surly kid in the video soon revealed to be none other than the son of reporter Ted Pretty who is conducting the broadcast.

Some things really are too good to be true.

Ted spoke to Esquire about the sudden explosion of his joke video which took him by surprise:

"It wasn't like I was trying to prank our viewers or make it look like it was not staged...I keep having to remind myself that anybody who lives in Las Vegas would be able to put two and two together pretty quickly. It was just a joke. I'm getting a kick out of people who think I was trying to pull one over on the viewers."

Well, even if it is fake, it was still pretty damn funny so we'll let this trickery slide. Nice work Ted, pass on our congrats to your quick-mouthed kid too!