What Is The #BowWowChallenge And Why Is It So Savage? 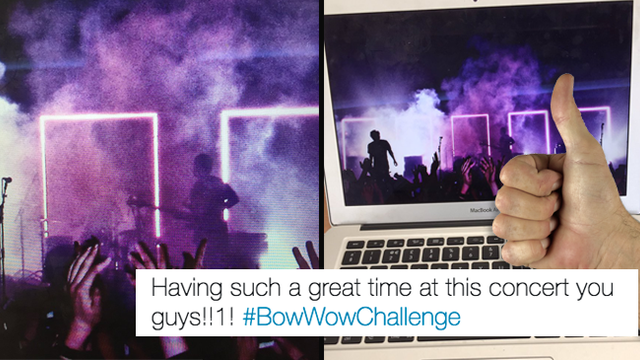 A new meme is born.

Ladies and gentlemen, fire up your meme sirens because we've caught another one. After being caught posting fake pictures of his luxury travel arrangements and flossin' for the 'gram, rapper and actor Bow Wow found himself as the subject of Twitter's latest hashtag trend and it is HIGH-LARIOUS. But how does the #BowWowChallenge work? Here's your explainer:

Who is Bow Wow?

Bow Wow, also known as Shad Moss and formally known as Lil' Bow Wow, is a rapper, actor and former child star. You'll have probably seen him before in films such as Like Mike and Fast & Furious: Tokyo Drift. He "retired" from rap back in 2016 at the age of 29.

How did the meme start?

Bow Wow posted a picture of a private jet on the tarmac at an airport with the caption "Travel day. NYC press for Growing Up HipHop. Let's gooooo." He tagged himself at the airport and let the snap simmer on Instagram.

Minutes later, he was spotted flying on a commercial jet to New York by a fellow passenger who recognised him and was immediately called out social media.

Someone then did a reverse image search on the picture he uploaded to Instagram and found the original source of the picture on Google and Bow Wow got caught in the lie of the century.

After the reveal went viral, people started creating their own "Scammer" memes to expose the lies behind their luxury lifestyles.

I remember the time I saw Beyonce in concert #bowwowchallenge pic.twitter.com/zTDWdiLnzf

Call me what you want but you can't call me broke #bowwowchallenge pic.twitter.com/Mn2OJhRquC

Of course, the meme blew things entirely out of context but it's still a gloriously ripe one to harvest for 2017's Meme Calendar.

But most of you on Twitter, your entire life is a #BowWowChallenge.... Don't @ me pic.twitter.com/cv54Fq3nlE