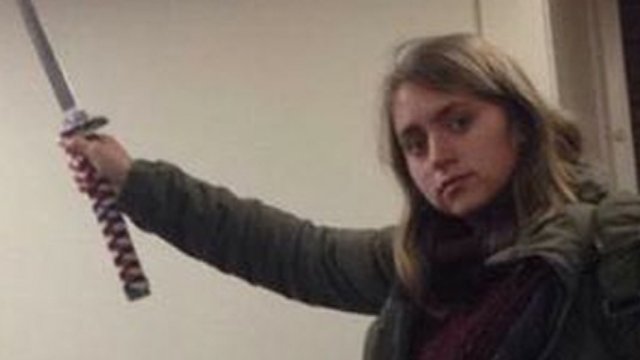 Jenny Lundt posted a Facebook status following an incident involving a glue gun at her college and it is going viral.

A US college student has seen her Facebook status go viral after she called out her college for its attitudes towards white privilege.

Jenny Lundt, a student at Colgate University, a Liberal Arts School in New York, shared a story online after a black male student carrying a glue gun for an art project inadvertently sent the campus into lockdown.

Lundt pointed out the hypocrisy of the security team as while this student had been stopped with an art tool, she had previously been able to walk throughout the uni carrying an ACTUAL SWORD!!!

Even better, Lundt went on to add several updates to her post, reminding her fellow white students to use this opportunity to check their own privilege and realise the huge challenges still needing to be addressed in terms of discrimination.

And people on social media certainly seemed to appreciate her speaking out:

white people using their privilege to educate, a concept! pic.twitter.com/6ugbTtxSOH

However, it has not come without some criticism, writer Sahil Gadhavi pointing out a wider problem in an open letter posted on Your Tango:

"If you read the comments on her post, you will see tons of people praising her, showering her with adulations and admiration for being a hero, a true revolutionary who isn’t afraid to speak the truth and expose the racism that still exists in American society. To those people, I ask, where is this response when you see black men being incarcerated every day while white men walk free for the same crimes or more? Where is this outpouring of attention when black children are being shot by the police every day, while your own white children are being raised in the ignorance afforded by their skin?"

Colgate University is yet to release a statement regarding the controversy. We'll keep you posted if they do.