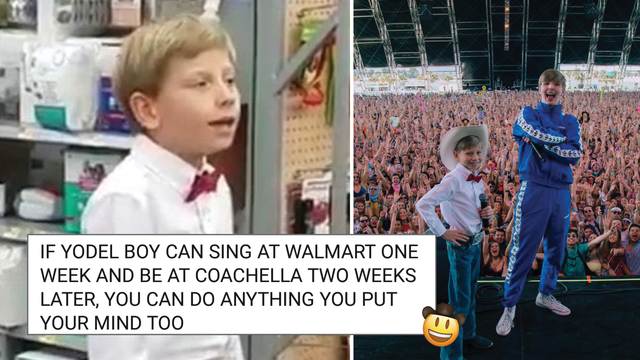 This is so cute!

If you've been MIA from the internet for the last few weeks, you might have missed the absolute icon that is Mason Ramsey.

Mason is a 10-year-old yodeling KING from Golconda, Illinois who got discovered singing in his local Walmart.

Since the internet has gotten to know Mason, his talents have yielded many a meme and he even got to go on Ellen.

He yodeled his way from Walmart to my show. You are not going to believe this kid. He is priceless. pic.twitter.com/Q56UuH5QUt

Mason headlined his own Walmart concert, but that seems like ages ago because he literally just played a little set at Coachella!

Whethan brought Mason out during his own Coachella set to sing "Lovesick Blues" by Hank Williams Sr.

yo @whethanmusic just brought out the yodel kid at coachella!! pic.twitter.com/BIBqv3UEFo

Mason did SUCH an incredible job and the massive crowd was feeling the heck out of his performance.

5 minutes into @coachella and @whethanmusic brings out Yodel Boy!!!!! pic.twitter.com/37nFjVjvMD

Justin Bieber even stopped by to meet and greet Mason.

BEST THING THAT HAPPENED #COACHELLA2018 where is @LadyGaga ?? pic.twitter.com/nXaOPFMVYh

i don’t give a fuck. yodel boy being at coachella and all those people going nuts for him is some of the purest shit i’ve seen in so long. what a cool moment

IF YODEL BOY CAN SING AT WALMART ONE WEEK AND BE AT COACHELLA TWO WEEKS LATER, YOU CAN DO ANYTHING YOU PUT YOUR MIND TOO

Sometimes! The! Internet! Is! Nice!

These Walmart yodel boy memes will make you say "yeehaw" and politely tip your cowboy hat.