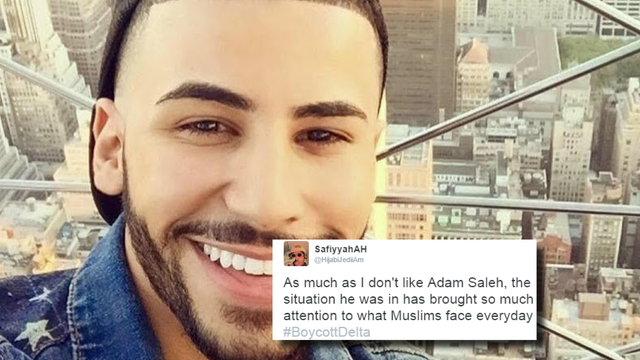 Is it a hoax or is Adam a victim of self-sabotage?

Yesterday (December 21), YouTube pranksters Adam Saleh and his pal Slim uploaded a video of themselves being removed from a Delta airlines flight from London Heathrow to JFK Airport.

The pair say that Adam was speaking to his mother in Arabic and was subsequently asked to leave the aircraft after other passengers claimed they felt uncomfortable.

The whole moment was captured on film and caused, what is commonly referred to as, a full scale "PR nightmare" for Delta.

Adam made headlines in early December for an airline "prank" he pulled in Australia. The friends claimed that Adam successfully smuggled himself onto the cargo hold of a one hour flight from Melbourne to Sydney, something which the airline vehemently denied. Adam most likely lied about this for views. That's apparent.

Many are using this as proof that Adam couldn't be telling the truth about his experience with Delta.

But this logic is flawed. This isn't the first time Delta and other airlines have removed or embarrassed brown passengers.

I'm not here to make a determination on whether Adam is telling the truth or whether or not he somehow orchestrated the drama to get a reaction. I, like most people on the internet, truly have no idea what went down.

But, just based on what we know about the level of discrimination that takes place on these flights, it's not unlikely that a passenger reported feeling unsafe after hearing Adam speak another language.

The New York Times caught up with some passengers who were also on that flight.

Adam is a provocateur with a questionable history on planes and with regards to race. Despite what we know about how Muslim, Sikh, and brown people are treated while flying, many would rather write Adam off than believe discrimination exists.

Is Adam the perfect victim? No. Do I take everything he's saying with a grain of salt and healthy amount of skepticism? Sure. Should we listen to people who say they have been the target of racially motivated injustice? Always.