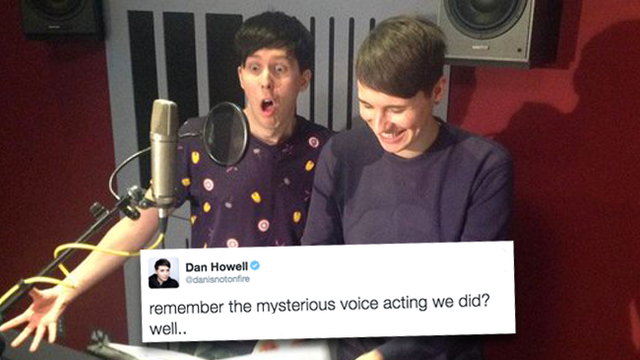 Is there anything more frustrating in this world than YouTubers dropping nuggets of vague and mysterious information on our timelines and then waiting an entire year for the big reveal? (The answer is no, by the way.) Well, one of Twitter's biggest mysteries had been uncovered today and actually, it's pretty damn cool.

Remember back in 2015, when Dan teased that he and Phil Lester had been doing some secret ~voice acting~?

Dan FINALLY took to Twitter to reveal what that voice acting was actually for and... *drumroll please*

remember the mysterious voice acting we did? well.. we are two gorilla princes in the new disney cartoon 'the lion guard'! pic.twitter.com/wIFnIAp7GO

Yes, Dan and Phil are voicing two brand new characters on the MASSIVE Disney Channel show, The Lion Guard! If you haven't already seen it, the cartoon follows the storyline of the original Disney movie The Lion King. It follows the life of Simba and Nala's son, Prince Kion. Dan and Phil will only appear in one episode (but it's the holiday episode so that makes everything ok.)

Of course, Dan and Phil have already made Disney voice cameos before in 2014's Big Hero 6 but this time they've had their OWN characters created, drawn and animated by Disney for the show and they've even got identical fringes to Dan and Phil themselves! Dan will be voicing "Majinuni" and Phil will be voicing "Hafifu".

And guys, it's airing TOMORROW in the US!

@Danisnotaspork apaz in america 'december 2nd 9:30am ET on the disney channel' and may 2017 in the uk

Oh, and we know you've been thinking it through this whole article... so let's not ignore the giant gorilla in the room anymore, shall we?

@alientyIer we're carrying on his legacy