YouTube's Highest Paid Stars Of 2016 Have Finally Been Revealed 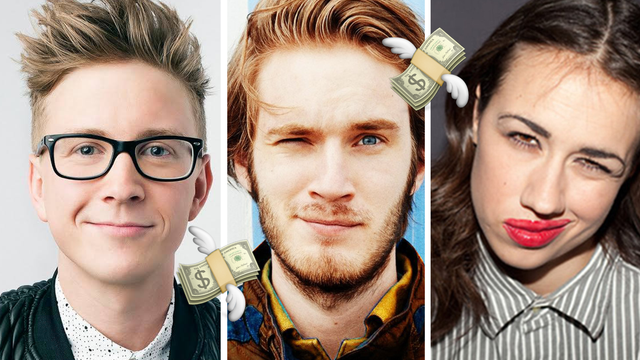 What do you even do with this kind of money?

When it comes to telling us who earns what, Forbes stays nosey. Thank God, because we're nosey as heck, too. The magazine has released its annual list of highest paid YouTube stars and, as usual, your YouTube faves earned some major coins this year.

Now, before you go asking 'how did they make so much money', let us take a moment to remind ourselves of some of the ways in which YouTube stars pad their bank accounts.

All the YouTubers on Forbes' list have big subscriber and viewership numbers, so a proportion of their revenue comes from advertising. Then there are sponsored products, book deals, brand deals, and hosting/TV gigs. Got it? Good. Here are 2016's top YouTube earners.

Miranda Sings got a Netflix show this year and Colleen went on a nationwide comedy tour and released a memoir.

Rosana's position as the 5th highest paid YouTuber makes her the highest earning food/cooking YouTube channel in the world.

Who knew pretending to kill your kid was so lucrative?

Swedish YouTube star Felix Kjellberg leads the pack, earning almost double his closest competitor. While Pewds tends to view his success as a bit, 'meh', he's still raking in big bucks from his book, brand deals, and er, some other stuff.

Forbes' list has some major drop offs. Michelle Phan, KSI, and Lindsey Sterling are among the noticeably absent on the big name list. This could signal a slight move away from brand deals as a source of major income to large-scale production contracts.