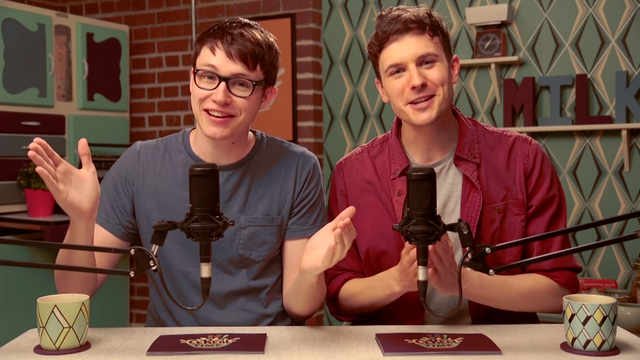 Or risk catching a serious case of FOMO

If you're reading this, you're probably #TeamInternet AF. You spend all your time online, you're probably a meme king/queen in your own right, and you probably consider the internet your second home. But, just in case you haven't seen everything there is to see online, we're bringing you the best web series' you may not have on your radar yet.

Teenagers is the well shot and often introspective web series that is raking up huge viewing numbers online. The series doesn't hold back when it comes to issues of sex, drugs, or violence. It's been compared to the hugely popular British series, Skins and, at times, feels Degrassi-ish (it's also set in Canada). There are certainly things that the series could build upon but it's already a super engaging web based hit.

Billy On The Street

Before getting picked up by TruTV, Billy On The Street was probably the funniest web series on the Internet. Crass comedian, Billy Eichner, became known for yelling at his contestants on the streets of New York and asking 'true or false' questions based on his own opinions. Although the show now appears on TruTV, Billy still posts short scenes to his YouTube page and, if you are a pop culture whiz kid, you'll laugh your ass off at Billy On The Street.

Comedians In Cars Getting Coffee

Is there anything more ~90s than loving Seinfeld? (Trick question. The answer is no.) TVs most famous comedy heavyweight went full #TeamInternet and got himself a web series in 2012, because why not? In this series, he drives around with some of the funniest people in the world, in some of the most amazing cars ever, drinking coffee at the coolest spots in New York and LA (mainly). Anyone who gets the humour of MirandaSings is okay in my book!

If you haven't watched H+: The Digital Series then you're going to want to start now. H+ is Wachowski vibes meets Limetown sensibilities. For people who are fans of brilliant sci-fi storylines and special effects too good for an online series, H+ is super engaging and addictive. While there haven't been updates for a few years, there are 48 bite sized episodes currently available to binge on. The look and feel of the series will blow you away. Seriously.

Cereal Time is one of our favourite chill out shows. We've talked Cereal Time on Popbuzz before but we're still kind of obsessed with it. The format isn't rigid, there are hilarious bouts of awkwardness, and plenty of familiar faces. Not to mention the fact that it is hosted by veteran YouTubers, Charlie McDonnell (charlieissocoollike) and Jimmy Hill (Jimmy0010). It's the ultimate fun time project for these two Youtube pioneers and we're happy they've found a cool little corner for their web series.