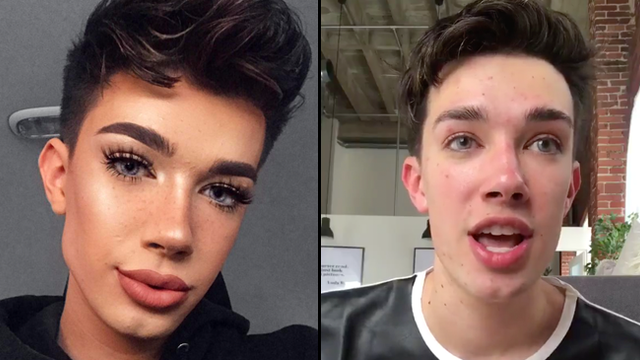 The MUA has posted a two minute video apologising for comments he made in the past.

James Charles is no stranger to an apology video. Just a few months ago, he posted an apology to the cast and crew of IT after he dragged the movie while sitting in the cinema on his phone. (He later got caught in a MASSIVE beef with the cast when he decided to do a Pennywise make up tutorial.)

And now, he's posted another apology video, this time regarding his "racist past".

James posted a two minute apology on Twitter on Friday (Nov 3) where he directly apologised for the racist tweets that he wrote on Twitter almost five years ago.

this should’ve been done a very long time ago; addressing my racist past. pic.twitter.com/cMoIIZE8iI

In the video, he points out that he had made many many insensitive, offensive and racist tweets in the past which have recently been dug up again. According to James, they were posted when he was "an ignorant 13 year old." He also addresses the ignorant and offensive remark about Ebola that he made earlier this year ahead of his trip to South Africa - four years later, when he was 17 years old. (Can't keep using the same excuse, tbh.)

While he HAS said sorry for his remarks before, he acknowledged that he wrongly apologised to his fans instead of the people he actually offended. He published his latest apology on Twitter and addressed it to his wider audience and the public.

To be fair, I'm white so I don't have the right to say if his apology was acceptable or not. But it's a start. He owned his mistakes and held himself accountable. It seems sincere but it's clear that he's still got a lot to learn. Many fans and followers accepted his apology.

I'm a black girl, and I just wanna say thank you for your honesty. Love u sister <3

Yo you have matured a lot i‘m glad you apologized and owned up to it, ofc it still doesn‘t make it acceptable but people make mistakes

coming from someone from south africa (me), i respect you for owning up and apologizing for your actions. don't let other people +

Sister @jamescharles i really respect your apology. You were professional, didn’t make excuses and genuine. Always proud of you.

While many acknowledged James' effort to apologise for the mistakes he made in the past, others aren't having it.

people are really forgiving james charles, a racist, because he made a 2 minute apology video.... pic.twitter.com/xKLdEmCZjZ

Just cause you make a big apology video for being racist doesn't mean you're forgiven, doesn't magically make it all better #jamescharles  pic.twitter.com/SFqB1w4295

@jamescharles Thank you for your apology. But until you prove you’re sorry, I won’t believe you. You said some things even ‘sorry’ can’t fix

Many are also calling out the fact that the majority of people who have "accepted" the apology are his white followers, the exact opposite of who the apology was made for - which isn't actually James' fault.

so uhhhhhH why are white people accepting james charles' apology,,, it's not your place to say that he's forgiven

White people actually out here forgiving james charles for being racist because he made an apology video about 6 months late, stfu

I’m sorry but why are white people accepting James Charles apology when the apology is issued for POC I’m???? pic.twitter.com/GoRpPWLxhD

We hope that James can truly live up to his apology and start fulfilling the promises he pledged in his video.