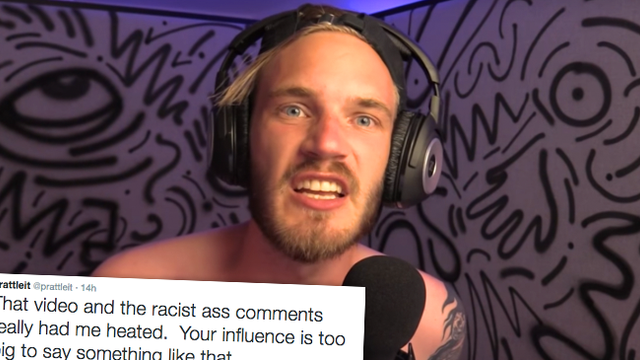 There's a #PewdiepieIsOverParty and you're all invited!

Day 6 of 2017 and the first Twitter hashtag party has arrived. This time, it's being thrown in the honour of YouTube's very own Pewdiepie.

Pewdiepie made it to 2017, after threatening to delete his account at the tail end of last year - and a lot of people online are low-key wishing he had gone through with the threat.

In his latest video called "I WON AN AWARD!", Felix throws a little tongue-in-cheek celebration over the fact that he was named as one of the most handsome faces of 2016. He swings around on his chair, chanting "Eighteen! Eighteen!" and then drops the n-bomb say he finishes the chant, saying "Eighteen, n****!".

Watch the video here and skip to 1:56 to hear the comment.

Soon after the video dropped, Twitter started the hashtag #PewDiePieIsOverParty in response to his use of the offensive word and its connotations which ended up trending worldwide.

That video and the racist ass comments really had me heated. Your influence is too big to say something like that. #PewdiepieIsOverParty

Never say the N word! Your influence is too big and that's not your culture. You're fueling those racists comments #PewdiepieIsOverParty

i like felix but i don't like what he's done, especially with an influence as big as he has. i hope he apologises :( #pewdiepieisoverparty

#PewdiepieIsOverParty non black people on this hashtag need to stfu and stop telling black people how to feel.

imagine thinking, saying the n word is a okay word to say in 2017,,,,,,, yikes.#pewdiepieisoverparty pic.twitter.com/4Qmjn2OhHG

JUST! BECAUSE! OTHER! YOUTUBERS! HAVE! SAID! IT! DOESNT! MEAN! ITS! OKAY! #PewdiepieIsOverParty

Instead of addressing or apologising for the use of the word, Pewdiepie retweeted this problematic tweet.

You only have to look at the comments on his video and in the hashtag to see that Pewdiepie's use of the word - which in his mind was probably a joke intended to cause this kind of drama, that's why he left it in the edit - has influenced a lot of people in a pretty negative way.

Anyway... the hashtag didn't work. Felix is still here. And he's disappointed about it.