Here's why the internet is freaking out about Essena O'Neill.

Big things have been happening in YouTube land over the past few years. Gone are the days when the mainstream media referred to YouTubers as “kids recording themselves in their bedrooms”. The new media star is a thing in 2015. But all that growth has brought on some controversy too. How much exposure is too much exposure? What’s the right balance in the creator-fan relationship? WHAT IS THE MEANING OF IT ALL?

Existential crises seem to be a trend with the YouTube and Instagram lots, with everyone and their grandmother renouncing “selling out” and singing the praises of authenticity left and right. What does that even mean?

According to recent Instagram dropout Essena O'Neill, social media is “not real” and not to be relied on for a sense of validation. It all sounds perfectly reasonable and yet Essena’s bold move has made her the talk of the internet.

"Without realising, I've spent majority of my teenage life being addicted to social media, social approval, social status and my physical appearance. Social media, especially how I used it, isn't real," Essena wrote on her website in the wake of deleting all her social media accounts.Essena O'Neill

Her posts draw attention to something we’ve all known for a while – most of us spend so much time on social media that online has become real life.  Well, more like Real Life 2.0, where every single moment is susceptible to editing.

With that in mind, where exactly does authenticity come in?  Essena is a relative newcomer to the existential crisis club, but YouTubers have been going through this for years. 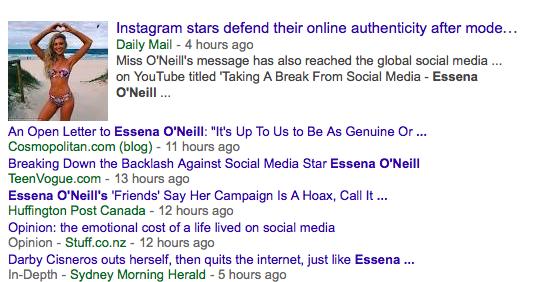 Back in 2012, Charlie McDonnell (aka charlieissocoollike, if you’re feeling super old school) sparked a slew of responses with his video I’m Scared. Set against a black backdrop , the video had none of McDonnell’s usual pep and was instead a collection of all the reasons Charlie felt like he needed a retreat from YouTube.

"I’m unsure,” “I am not happy,”  and “I’m scared", McDonnell proclaimed three years ago.

Much like Essena, he had become wrapped up in an unrealistic image he had created for himself  because “Every person, deep down, whether they are willing to admit it or not, they just want other people to like them.”

The video sparked a slew of responses, with YouTubers confessing left and right that they, too, were scared of their online personas taking over their lives and of losing the connection with their viewers. McDonnell retreated from youtube for a few months and then returned with a new purpose and a toned down image.

In 2015, with YouTube, Vine and online media in general finally on the radar of mainstream entertainment and brands moving into the online space, it might be time to take another look at the authenticity issue.

If on one hand we have online personalities trying to maintain the connection (through things like daily vlogs, Follow Me Around videos, Fri-Diaries (where’s Fri-Diary gone Grace? Where is it???).

Many creators have gone for an ironic tone (see: Jenna Marbles) or complete honesty (a la Ingrid Nielsen, Shane Dawson, anyone who’s ever made a Coming Out video) as they transition into mainstream success. On the other hand, production is getting more elaborate (even people filming “in their bedrooms” have professional camera and lighting equipment now), branding has become the buzzword of the day and sponsorships (announced or not) are behind everything.

In the ongoing struggle for authenticity, is the answer really to drop social media altogether? Are brand deals inherently evil? Or is there a way to negotiate the social media landscape to make a living and stay true to the original message? Share your personal social media strategy below.