YouTube's new Pride initiative will give you all the feels - but it's being dragged down by some HORRIBLE comments.

Over the past couple of years, YouTube has been an incredible platform in support of the LGBTQ+ community and in honour of June's Pride Month, they have kicked off a campaign entitled '#ProudToBe' in which community members are urged to share their stories and be proud of who they are.

The video is features clips of some of the most watched 'Coming Out' videos of the past couple of years. YouTube's boldest and brightest LGBTQ+ figures such as Kat Blaque, Troye Sivan, Dodie Clark and Gigi Gorgeous are all included, as well as snippets from Ingrid Nilsen's incredibly moving "Something I Want You To Know" video.

As a platform that has seen the celebrated coming outs of many of its biggest and most inspirational users, YouTube is calling for all creators - big and small - to be part of a wider initiative to spread positivity across the internet.

The compilation comes at an important and vulnerable time for the LGBTQ+ community. Following the unspeakable things that happened in Orlando earlier this month, the YouTube community has voiced their concerns about the safety of their own lives after Christina Grimmie's tragic passing. Outspoken role models such as Tyler Oakley and Hannah Hart have both uploaded videos about how scared they're feeling following the recent events.

The campaign calls for the community to "answer with pride," when their own identity is questioned but if you turn your attention to the comments section of the video, you'll find that there are still people in the world who don't want this community to have a voice.

At time of writing, the video - which has already garnered over 4 million views - currently has more DISLIKES (153k) than LIKES (114k) and the majority of comments are almost too vile to screenshot.

Here is a handful of comments that we've deemed acceptable - and we use that term VERY loosely - to share with you. Hopefully, YouTube disables the comments section ASAP. 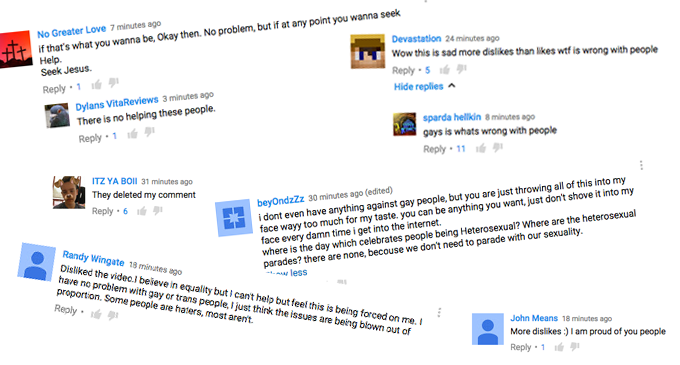 In spite of the pathetic and incredibly homophobic negativity surrounding the video, YouTube is urging members of the LGBTQ+ community to upload their own #ProudToBe videos to the platform, or on social media with the official hashtag.

Go to YouTube and watch the video, and give it a thumbs up. Sometimes, the negative voices shout louder than the positive ones. Shout louder, be prouder.