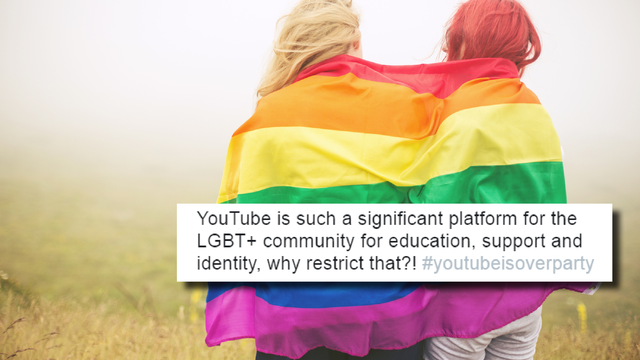 New revelations about YouTube's Restricted Mode policy is bringing up key questions about censorship and visibility for the LGBTQ+ community. The platform, which has publicly supported its LGBTQ+ creators in the past, is facing a great deal of scrutiny over how it censors videos from queer and non-binary users.

youtube censoring lgbt+ content is so damaging to queer youth and just an absurd thing to do in 2017, I'm honestly shocked

YouTube has grown from a relatively insular community of creators to a rapidly expanding and outward facing product of Google's quest to rule the world.

When it became apparent that YouTube's Restricted Mode was excluding precisely the type of content that made the site a safe space for young queer folks, the backlash was instantaneous.

I am disgusted by YouTube's actions this blatant homophobia is vile. KISS MY QUEER ASS #YouTubeIsOverParty pic.twitter.com/2s4HAcWt3e

can you explain to us why you're restricting LGBTQ+ content? this is so not okay.

YouTube is such a significant platform for the LGBT+ community for education, support and identity, why restrict that?! #youtubeisoverparty

youtube: *makes videos saying lgbt people should be proud of who they are*
also youtube: *restricts lgbt videos* #YouTubeIsOverParty

A message to our community ... pic.twitter.com/oHNiiI7CVs

While it's a noble goal to try and keep younger users from accessing inappropriate content, censoring open discussions about gender and sexuality are not the way to accomplish this.

Some creators noted that some of their content, even non-explicit videos, had been censored in Restricted Mode.

still not fixed. one of my recent videos "8 Black LGBTQ+ Trailblazers Who Inspire Me" is blocked because of this. i'm perplexed, @YouTube. https://t.co/MrGBmPum1a

@ThomasSanders @tyleroakley @YouTube Some of your content has been restricted too including your Black History and Women's History videos.

YouTube has expanded to dizzying heights and it's unclear whether this is a growing pain or just a well-intentioned, badly executed feature.

For many, watching videos that focused on LGBTQ+ stories and narratives gave them the courage to come out and provided answers to questions they had about their own sexuality.

so many LGBT children find refuge, acceptance, and knowledge through youtube and to take that away from them is NOT "being sensitive"

The idea that you can congratulate LGBTQ+ creators on their bravery, while simultaneously hiding their content is a reality divorced from common sense.

YouTube has built a platform off the backs of queer and non-binary creators. To censor their ideas, stories, and narratives now is nothing short of a betrayal.