WATCH: YouTuber Adam Saleh Just Got Kicked Off A Plane 'For Speaking Arabic' 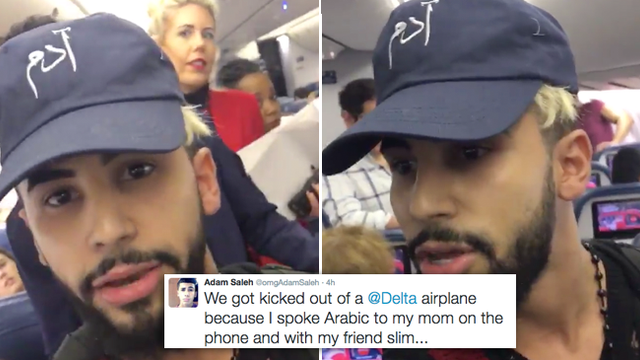 If you needed more proof that a lot of people in this world still can't quite grasp the idea of tolerance and acceptance of races, sexualities and cultural differences that don't mirror their own, you need to see what just happened to YouTube star Adam Saleh.

Adam, 22-year-old vlogger and prankster with over 2m subscribers has just been removed from a plane at London's Heathrow airport because 'he spoke Arabic to his mother on the phone'. Adam was just about to travel back to New York City with fellow YouTuber Slim Albaher on Delta Airlines when other passengers complained to flight attendants that they felt 'uncomfortable' with the language the two men were speaking.

We got kicked out of a @Delta airplane because I spoke Arabic to my mom on the phone and with my friend slim... WTFFFFFFFF please spread pic.twitter.com/P5dQCE0qos

Delta airlines just kicked Adam and i off the plane because we were speaking Arabic...

In the video, you can see other passengers (all white) at the back of the plane shouting, "Bye!" while swearing and waving at the camera. The only other person who stood up for Adam and Slim, who were in the process of being removed from the plane, was a man of another minority ethnicity who also appeared visibly upset at the situation.

Once he was off the plane, Adam periscoped multiple videos of his ordeal.

Police were then brought to the pair.

UPDATE: Delta just brought the police to speak to us.

And then they were security checked again.

They were soon checked into another flight, with another airline and on their way to NYC.

UPDATE: were now on another flight with a different airline heading to NYC after being checked for 30 minutes. We land 5:50pm in NYC

White people be like "I am uncomfortable with Arabic" and then go and get an Arabic phrase tattooed on their bodies !!!!! #BoycottDelta

If you see a human being humiliated in front of you and you don't feel humiliated too .. Go and question your humanity

I guess Freedom of Speech only applies to white men who speak English. #BoycottDelta pic.twitter.com/3s32keaJGe

if u kick them off the plane for saying "Allah", kick off whites every time they mention God cause its literally the same word #boycottdelta

Being kicked out of a plane for speaking Arabic is rediculous. The fact people were waving and saying bye is disgusting. #BoycottDelta

Switching my @Delta Christmas flight to a different airline. An airline that isn't threatened by the use of multiple languages #BoycottDelta

Being drunk, abusive and arrogant is not enough to get kicked off a plane. But Being smart enough to speak 2 languages is? #BoycottDelta

Delta Airlines have since made a statement regarding the situation: “Two customers were removed from this flight and later rebooked after a disturbance in the cabin resulted in more than 20 customers expressing their discomfort. We’re conducting a full review to understand what transpired. We are taking allegations of discrimination very seriously; our culture requires treating others with respect.”

Adam and Slim will be updating their accounts once they land with more footage and information of their terrifying experience. Find them here and here to keep up with the story.