These YouTubers Are Playing Trump's Inauguration & Fans Are Seriously P*ssed 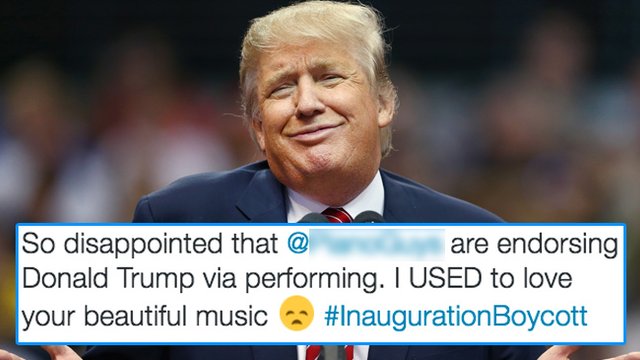 The viral video group have joined the lineup for the concert in Washington DC this Friday (January 20th).

A band who found fame on YouTube are the latest musical act to accept the invitation to perform at the inauguration ceremony of Donald Trump this Friday (January 20th).

Yes, having been rejected by *deep breath* Elton John, Rebecca Ferguson, Andrea Bocelli, Kiss, Garth Brooks, Charlotte Church, Jennifer Holliday and a Bruce Springsteen tribute band, Trump has now managed to book The Piano Guys for the concert, the Utah based quartet known for their novelty covers that make use of every part of the piano.

But, in a press statement the band members are insisting that their performance is not in any way an endorsement of Trump, instead hoping to merely spread "love, joy and hope" through their music:

Our desire as The Piano Guys has always been to spread hope, love and joy through our music and videos. We accepted the invitation to perform at the Inauguration with this objective in mind. We would have been honoured at the opportunity no matter who was being sworn in. We, too, are distraught over how divisive this chapter in our nation’s politics has been, but we have hope for the future! As the pendulum of politics swings one way or another, let us all pray for understanding and for goodwill to win in the end.

You sound "honoured" now but wait till the song requests come in and you're stuck playing The Apprentice theme on a loop for 40 minutes...

Many fans have taken to Twitter to express their disappointment at the group's decision to play:

The Piano Guys will be playing at the inauguration of Trump. This saddens me more than I thought possible.

i can't believe the piano guys are playing at trump's inauguration... im so disappointed..

Thought The Piano Guys were cool until I learned that they're performing for Trump...lol never mind

I just found out that The Piano Guys are playing at trump's thingy (I forgot the name) and I'm so disappointed... lost my respect for them..

So disappointed that The Piano Guys are playing at Trump's inauguration. I actually bought their music wtf

So disappointed that @PianoGuys are endorsing Donald Trump via performing. I USED to love your beautiful music#InaugurationBoycott

Whereas some people just don't seem to care...

What do you guys think of the inauguration lineup? Let us know below.