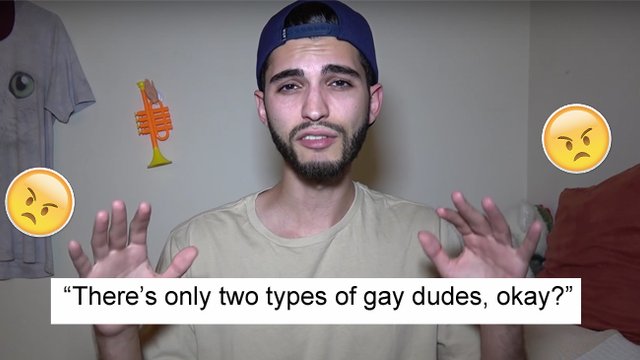 In this weeks edition of 'YouTuber Douchebag' news, we present: NoBiggie and the homophobic 'prank'.

Yes, that's right, another YouTuber doing something problematic. Who'da thunk it? This time it was YouTube star NoBiggie. He has nearly 400k subscribers on the site and he regularly pranks people with song lyrics via text.

In one video, uploaded on 28 Aug, he texts the lyrics to "Closer" by the Chainsmokers to a gay friend, whom he apparently met at a YouTube conference. Why? Because NoBiggie is convinced his gay friend was trying to hit on him.

NoBiggie decides to do the reasonable thing and trick the friend into thinking he wants sex. Because that's hilarious and not totally gay, right?

The video is full of homophobia. Firstly, he says that there are only 'two types of gay guys' (those that are 'chill' and 'don't hit on him' and those 'sassy, egotistical' gays who do. Wow.

Then there's also the dry heaving, pretending to vomit and general disgust in his voice throughout the video. Gays are gross, right?

The video concludes with NoBiggie having a go at his friend for giving into his flirty texts. He says at one point that he has to 'stop texting the guy' because he started getting a boner the imagery was getting 'way too much'.

Thankfully, the comments section was pretty savage when dealing with NoBiggies homophobia.

The truth, the whole truth and nothing but the truth.

We couldn't have put it better ourselves.