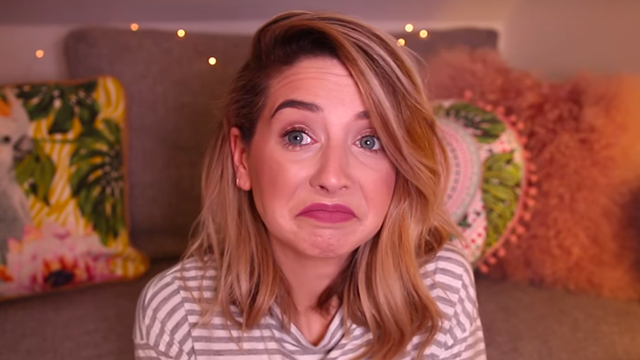 To be fair, she had no idea about the connotations behind the gif and deleted it straight away.

Zoe Sugg got into a spot of bother on Twitter the other day after her followers started dragging her in the replies of a tweet in which she unwittingly used an "offensive" gif.

In a tweet that promoted her pal Tanya Burr's flawless new illuminating powder, Zoe used a gif of actor Bill Cosby who, in case you didn't know, is currently on trial for various sexual assault allegations in relation to over 50 women. At the time, she had no idea who the person was in the gif.

Almost immediately after hitting the send button, her followers started replying to the tweet informing her of the connotations behind the gif - some a little angrier than others over the clearly unintentional slip up. Nonetheless, she thanked her followers for pointing out the identity of the person in the gif, removed the tweet and issued a quick apology.

Thanks for letting me know about that GIF guys, I wasn't aware of him. Maybe twitter should remove that from the "makeup" drop down...

Her reply does raise a fair point about the Giphy platform though. When you search "Makeup" on Twitter GIF tool, the Bill Cosby GIF is 10th option. While it may be a little much to ask Giphy to remove every single gif of problematic people who have been accused of sexual assault, it's surely not too difficult for the two platforms to work together to ensure they don't appear on the first page?

Anyway, 9 minutes after the initial tweet went out, Zoe resent the tweet with a gif of Miranda Sings and the caption "Can't go wrong with Miranda Sings."

Excuse me @TanyaBurr but I am OBSESSED with your pink illuminating powder pic.twitter.com/0hUctlbOqs