YouTubers and fans alike assembled in support of Zoella's Snapchat and it was LIT. #WeStandWithZoe

Zoe’s had a tough old week in the press, hasn’t she? First, her earnings were scrutinised YET AGAIN by mainstream media who still continue to be astounded by this new and exciting outlet the kids are using these days. "Is it called The YouTube, Debra?" "Yes, that’s the one Graham!"

In case you missed it, Zoe snapped a pretty flawless pic of herself in bed the other day. She looked body confident, happy, chilled and most importantly, real - a positive image to send to her fans. However, as the media is so obsessed with the slightest glimpse of the female anatomy, they’ve managed to turn it into a national scandal.

ZOELLA WEARING UNDERWEAR AND FLASHING HER MIDRIFF - WHATEVER NEXT!?

HALF A BELLY BUTTON?! SHIELD THINE EYES! God grief, we can’t believe it hasn’t been censored yet! 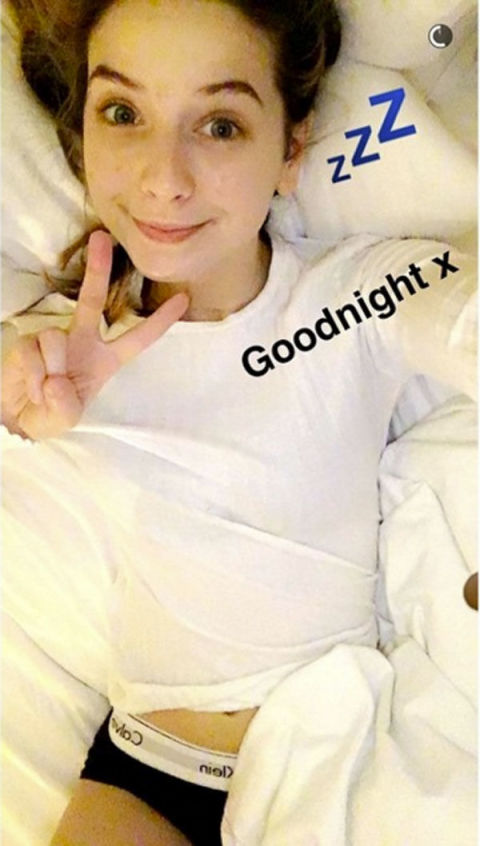 @officialzoella / via snapchat - I mean, NGL, it’s so scandalous I don’t think I’m going to be able to sleep tonight.

Here’s a few headlines that Zoe has had to put up with over the past 48 hours. 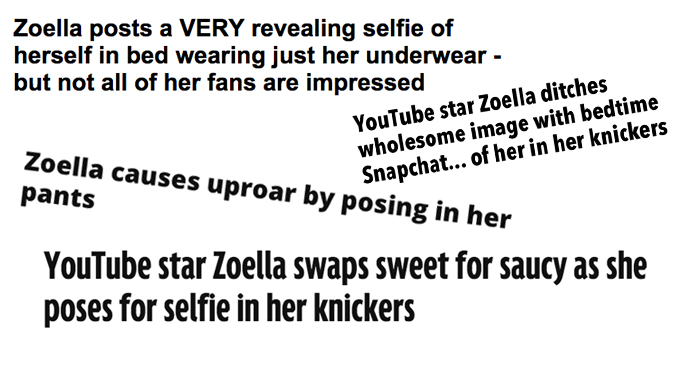 These were ACTUAL HEADLINES on NATIONAL NEWS OUTLETS based on the most unrevealing Snapchat of all time, and a handful of salty tweets. Never mind the horrific and incredibly important news breaking all over the world right now, OWNER OF YOUTUBE 'ZOE ELLA SUGGS’ HAS JUST POSTED A *VERY* RACY PIC.

ZOE IS A 25 YEAR OLD GROWN WOMAN WHO CAN DO WHATEVER THE F*CK SHE WANTS WITH HER IMAGE!

And how DARE she not wear plaid flannel pyjama bottoms that cover up her ankles. For heavens sake, Zoe - have some damn respect!

Bloody morons. Writing about my PJ's when there are SERIOUS things happening all over the world. SMH. pic.twitter.com/22qGkEzgdM

The best part of this entire hot mess is the resulting hashtag that began trending across the United Kingdom on March 23. #WeStandWithZoe sat at the top of the Trends Chart for hours and it was jam packed with supportive messages from fellow YouTubers and fans alike. It was AMAZING and can only be described as one of the sassiest middle fingers we’ve ever seen.

.@Zoella If that's 'VERY' revealing then I'm practically a flasher every time I sit down in skinny jeans! #WestandWithZoe

Here's a photo of me in my undercrackers being super sexual #westandwithzoe pic.twitter.com/aWZQMvaYFP

Can women not escape being sexualized, @TheSun? @Zoella can wear bikinis but can't snap in pants? #WeStandWithZoe pic.twitter.com/jSCzEGUbY8

The Sun thinks this it's scandalous for @Zoella to take a snapchat in her pyjamas. #Goodnight #WeStandWithZoe pic.twitter.com/7Erpyhjp1L

So the first one is alright and the second one isn't? @TheSun Explain. #WeStandWithZoe pic.twitter.com/q9OyIx3MFZ

No woman deserves to be shamed for feeling good about her body.#WeStandWithZoe

This response shows exactly why we should all be supporting Zoe right now, not criticising her and all the other women who continue to face double standards in the media. Whatever she decides to do, and whatever she decides to post on her terms is none of ya damn business. None. None at all.

Is everyone free to pass comment? Yes, but sexualising what was intended to be a confident and honest snap to her fans is honestly so pathetic. It’s borderline slut-shaming and you know it.

Just because Zoe has worked tirelessly to create a wholesome, safe and non-toxic space for her young fans to enjoy and feel comfortable in, that doesn’t make her any less of a woman nor should she be judged on how she decides to present herself when she's not 'being the brand'.

At the end of the day, she is a real human with a real life. Sorry if that sudden realisation has shattered your naive illusions. (I personally can’t wait for the mainstream media to find out she that doesn’t shower in a full body wetsuit. What a thrilling day that will be.)

As fans of Zoe will know, it’s not easy for her to be confrontational about things like this but as a 25 year old female myself, it’s giving me so much life seeing her stand up for herself and tell those critics where to shove it. Slay me, Zoe. Slay. Me.

And as much as we’d love to post a pic in our Calvins in solidarity, we literally cba to make the effort. God, where does this Queen even find the time between being so raunchy and scandalous?!

Be sure to let us know your thoughts on the subject - we expect to see a bunch of middle finger emojis because THAT'S HOW WE ALL FEEL RIGHT NOW.