Who Is Hailee Steinfeld And Why Are We Obsessed With Her?

Here at PopBuzz we love a new, exciting and thrilling pop entity.

And what could be better than a thrilling, exciting, and new pop entity who has appeared in Taylor Swift's "Bad Blood" video, had a role in Pitch Perfect 2, and even starred in this film called Barely Lethal: An Ordinary Life Is An Impossible Target, starring Jessica Alba and Samuel L. Jackson. 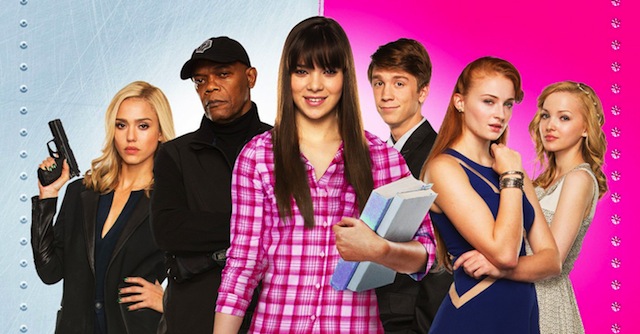 Well, this new pop entity is called Hailee Steinfeld and it seems that since her debut single "Love Myself" appeared online today (6 August) the internet has gone into a bit of a meltdown, which isn't that surprising because it's a proper banger.

Now, we've actually written about Steinfeld before after she duetted with teen heartthrob and Vine star Shawn Mendes on his new single "Stitches". We were pretty taken with the 18-year-old's voice then and since then we've been on a bit of a binge.

Here she is singing "Flashlight" from Pitch Perfect 2. It's rather good.

We've also been perving through Steinfeld's Instagram and discovered that she's giving us complete hair goals.

Look how windswept and perfect it is.

The most perfect of waves.

Anyways, back to the music.

Hailee has been in the studio working with Pete Wenz (you know, from Fall Out Boy), Captain Cuts, Harvey Mason, The Futuristics and  Mattman & Robin, who have also worked with Taylor Swift, Tove Lo, Carly Rae Jepsen and Adam Lambert. Now, if that doesn't get your pop senses buzzing then we're not sure what will.

Her debut single "Love Myself" is an instant ignition of pop determination, complete with a soaring chorus and euphoric production. The lyrics, which focus on self-love, aren't didactic or nihilistic. Instead the whole shebang is totally glorious and we've been listening to it non-stop.

With a debut album due soon, we're ready to let Hailee Steinfeld into our lives.

What do you think of "Love Myself"? Listen below and let us know :)

We're Crushing HARD On Sinead Harnett In Her New Video

Robin Thicke Is Back (Together) And It's Not Sh*t