22 Tweets From 2016 That Were Just Really F*cking Funny 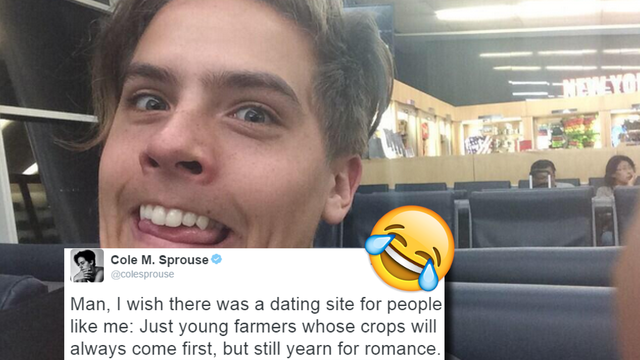 2016, the year that laughing while you cried became super normal.

No matter how utterly chaotic 2016 has been, we'll always have our tweets. Which is to say, Twitter was funny even when the rest of the world wasn't. To show our appreciation for one of our favourite platforms, we thought we'd give you the gift of laughter and highlight some of our favourite tweets this year.

*listens to Mr. Brightside once* pic.twitter.com/4gNSitoIoJ

They are invited to the cookout pic.twitter.com/3VJUqhCbk8

4) I'd like to kick the gay agenda into high gear pls.

...so my uncle got a drone now he's fucking with people pic.twitter.com/xFwnLDUYoa

6) Spotify playlists are getting so specific these days...

spotify playlist of everything you're too afraid to say out loud

7) Alright class. Time to partner up!"

me trying to find a study group to join after i've ignored everyone in my class the entire semester pic.twitter.com/hzt66JfPTQ

[perusing bank statement]
DAD: did u spend $90 on something called "christina aguilera masterclass"
ME: no no nnooOOOO WHOA WHOAAAAH ♬

9) When you just want some loyalty.

My man really ate without me pic.twitter.com/6PE8K5yfvJ

The tory leadership vote has closed and the party waits for the result pic.twitter.com/hrn5VH02Cc

13) Memes in the age of Lemonade

When lemonade goes from 6 inch to daddy lessons pic.twitter.com/5yAxA3aNw5

1) Edward was a vampire. 2) There was a part of him that thirsted for my blood. 3) I was in love with him. pic.twitter.com/9KsUavy3M1

16) Ambition after a certain age

Depression vs the last droplet of serotonin i have left pic.twitter.com/d4MADM30q8

Man, I wish there was a dating site for people like me: Just young farmers whose crops will always come first, but still yearn for romance.

20) I don't remember this from the Disney Channel

I'm Rihanna from Rihanna and you're watching the Disney channel pic.twitter.com/tkvLJ6PH6L

when the stranger things theme comes on pic.twitter.com/VQTuNrJ1VI