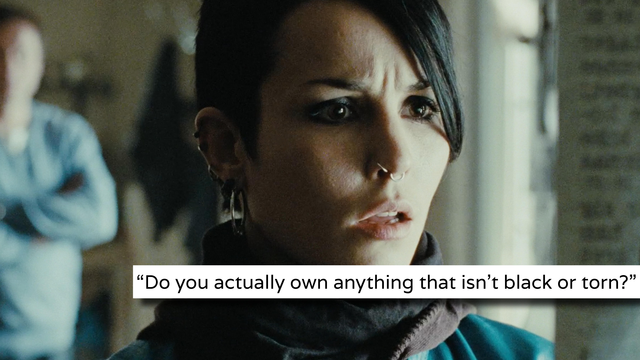 We're looking into your soul

There's always an alternative one in the family. The one who wears a little too much black, constantly has the car radio on rock channels, is the talking point of the whole family. If you can relate to the following, you might just be your family's special alternative snowflake.

1) Your mother’s catchphrase when she sees you is, "are you really going to wear that much eye makeup out of the house?"

3) "Stop putting holes in your body"

4) There are so many band and gig posters on your walls that you’ve forgotten what colour your bedroom is.

5) You go through at least 3 hair colours a year and your parents nag you about each and every one of them.

6) Your parents know that if it isn’t gig tickets, money for gig tickets, a gift voucher for band merch, or an album pre-order then it’s basically not even a proper gift.

7) Do you actually own anything that isn’t black or torn?

8) You've got a pair of dirty converse in your room right now that your parents would love for you to clean.

10) When someone in your family brings up a band you like and you’re ready to recite their entire Wikipedia page from memory.

11) The fact that your parents have definitely referred to one of your friends as "the little emo one" but they dress and look exactly like you.

12) The fact that you're constantly out of money and your parents are like "what happened to the money I gave you?" So you pretend like you didn't just have a bunch of band merch delivered to the house.

13) That moment an elderly relative asks if "the boy you're always talking about" is your boyfriend. But the boy is.....the lead singer of your favourite band.